Joanne (Jessica Meyer), Gillian (Babette Bellini), Lulu (Hayley Fielding), Beezus (Elizabeth Horrowitz) and Penny (Lauren Evans) are the equally loved and feared glamourous Real Housewives of Brisbane. One by one they introduce themselves at the start of the Brisbane Arts Theatre musical of the same name, in parody of the US media franchise of shows that document the lives of a city’s affluent housewives. In the true tradition of the franchise, one day the women are besties, the next day, enemies. And they all have secrets, beyond just their ages and details of their cosmetic works.

The story starts with the group taking time out of their brunching and ladies-lunching lives, to gather at on-the-outs housewife Poppy’s final soiree. The funeral home doesn’t only serve as the perfect selfie backdrop (#amen) but also the location of Poppy’s beyond-the-grave decree that Joanne is the new head housewife. Though the most senior of the ladies, Beezus is shocked, Joanne is not surprised at all; her life is so amazing that even she’s jealous of it.

The resulting narrative unfolds with authentic nods to the motifs of the guilty-pleasure genre that trashbaggery tv tragics will appreciate. On-screen snippets of interview/confessional moments punctuate the on-stage action to assist in transition between scenes and add an appreciated touch through their Brisbane scene backdrops to the ladies who are, of course, always plugging a latest endorsed product of the ‘face yoga mat’ sort. 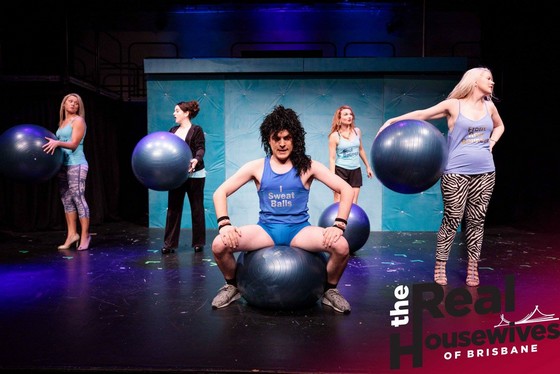 These form an integral component of the reality genre and therefore a necessary part of the storytelling process, however, once the backstory of the ladies’ complicated relationships, both within the group and with others, is shared, things move from the TV show structure to a narrative of its own making, albeit with some recognisable plot lines such as when, like Teresa from The Real Housewives of New Jersey a Brisbane housewife and her husband are charged with fraud. Not only that, but there is the intrigue of infidelity and a rat in the ranks of the group, spilling their sex, lies and secret lives online.

Musically, the show is a mixed bag. The irreverence of songs with lyrics like “we tuck and then we nip… sometimes we skinny dip” suits the show’s fun feel, but, ensemble songs like Bully Them Back, as well Act One’s introductory number, fail to realise their potential due to a lack of collective vocal power. In solo numbers, there are some celebratory moments; Jessica Meyer finishes Act One strongly with sing of the tragedy of her life and, after intermission, Elizabeth Best delivers a strong, jazzy number to open Act Two to her fundraising charity Bitch Ball for deaf dogs.

The Real Housewives of Brisbane is full of funny moments and, of the ladies, Elizabeth Best is a standout as the straight-faced, cynical housewife-elder Beezus. In character contrast as Lulu, Hayley Fielding is also dramatically very good in conveying the cavalier ‘new-nose, new-you’ attitude of the always-medicated, newly-divorced housewife Lulu.

It is the supporting cast who are given the most to work with in terms of character though, and Reagan Warner and James Burton make a meal of even the smallest of comic opportunities. Proving his versatility, Warner goes from playing John Proctor in the theatre’s recent The Crucible production to becoming, amongst other things, a funeral director, apathetic shoe store worker, Moroccan spiritualist (because every Real Housewives season has a sun and fun vacation trip away) and most memorably an over-the-top fitness instructor leading an absolutely hilarious bouncing ball routine as a show highlight. Burton is similarly very funny in his various roles, particularly in show of lap dance boot camp moves as part of sex therapy with his Christian wife Penny, who remains oblivious to his flamboyance. Unfortunately, the men’s characters also showcase the dodgy wigs that seem to be trademark for an Arts Theatre show, though at least in this instance they sort of fit with the stereotypes that populate the parody.

Unfortunately, another staple of Arts Theatre shows seems to be sound issues and opening night of The Real Housewives of Brisbane is no exception to this. Indeed, significant sound concerns sometimes detract from overall enjoyment, especially in Act Two where a chunk of time is spent with songs and dialogue shared in competition with crackling audio static.

Although not the slickest of shows, The Real Housewives of Brisbane has a tongue-in-cheek appeal that makes it perfect for an easy-to-watch girls night out. It is full of fun and comfortable humour with digs at Ipswich and the Gold Coast, and a cat-fight of course. Like the tv genre it mocks, it is a wonderful guilty pleasure that doesn’t take itself too seriously, and is, therefore, recommended as a very happy couple of light-hearted hours.