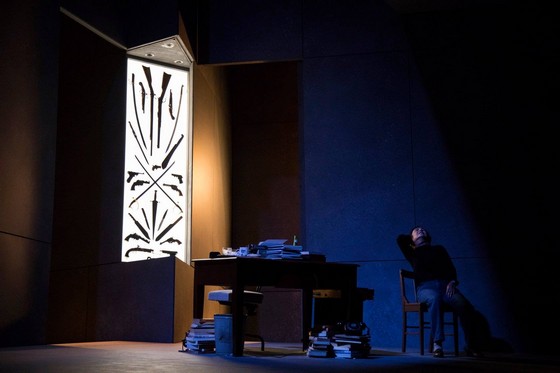 A bold move to stage a two-hander at an hour forty five minutes with no intermission in the Heath Ledger. The massive stage space was wisely reduced with a monolithic bunker design that sloped upwards from (audience) left to right which I took to hint at the title’s terrain but mainly gave a visual indication of the power dynamics at play. This was consistent early with Davis always ‘above’ Rotondella as befitted their comparative status (and the distance between them also seemed calculated) but that spacing lost its discipline later in the play with the first ‘crossing’ of less impact than one might have thought.

The decorated Davis is suitably caustic as Highsmith and newcomer Rotondella is all wayward gestures as the callow intruder into her literal bunker-like mentality. But those default positions for a play that talks about and explores, amongst other things, transformation felt too rigid for too long.

More interesting were moments of contrast – seeing Highsmith unexpectedly enjoy ‘show tunes’ and especially become immersed in moments of introspection. Likewise, Rotondella comes to the fore in the latter stages when his character takes on a stronger, more confident tone and the power dynamic is altered.

Those transformations needed to be sharper and the timing in only the second preview felt off. That should shake itself out over the run with the back and forth becoming crisper and the shifts more clearly delineated. 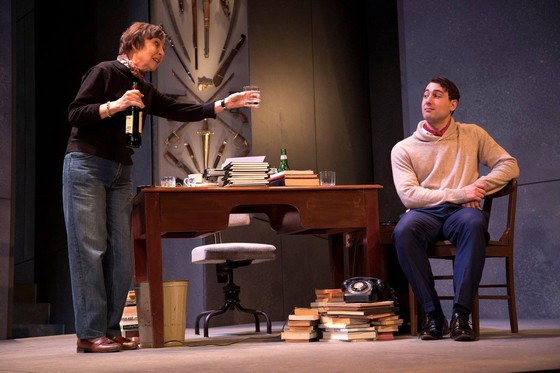 There were moments you could see where the play will really hum – the delight Davis gives Highsmith when she deduces Edward Ridgeway’s background; the two of them plotting the next Ripley novel; and the interaction in the final act.

As a writer I also enjoyed observations and commentary on the process of writing and the relationship between an author and the world and characters they create.

At this stage the play didn’t quite fire on all cylinders for mine but that’s what previews are for and once this finds its rhythm and with the talent involved will be a tidy two-hander with an appropriate denouement.