‘Single Asian Female’… it’s a clever play-on-movie-title precis for dating profile purposes. Zoe (Michelle Law) however, is so much more than just this descriptor… classical musician, sister and daughter. Like many, her fractured family oscillates between being a constant of disorder and an annoying inconvenience… and this is even without her knowledge of her mother’s secret. This is a simple overview of Michelle Law’s debut play Single Asian Female, which ran at La Boite in 2017 before enjoying a sold out season at Sydney’s Belvoir Theatre the following year. And now it is back where it all began for a return Brisbane season and show of how witty writing and on-point performances can contribute to contemporary conversations around the diversity of our country’s communities 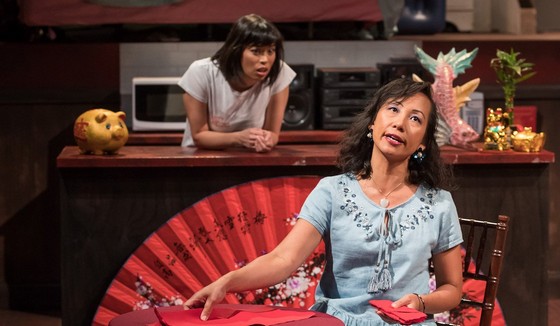 The premise of the work remains the same, the story follows a family of Asian women as they navigate the intricacies of race associated with life in everytown Nambour. It begins with now single-mother Pearl (Hsiao-Liang Tang), owner/manager of the The Golden Phoenix Chinese Restaurant, rejoicing in the finalisation of her divorce with delivery of a table-top karaoke “I Will Survive”. Pearl is clearly a strong woman, as are her daughters Zoe and Mei (Courtney Stewart), but also clear is the crossroads of life at which they all now individually find themselves. As an audience, we follow as their futures are thrust upon them, with a lot of heart and humour along the way.

While each woman is on her own journey, there are a lot of holistic themes to the tale that only add to its appeal. Indeed, the play explores generational and cultural gaps in such a relatable way that its heart cannot be denied. Much of the play’s success comes from its ability to find both the honesty and humour in all types of relationships. Even the most exaggerated of characters reveal a truthfulness at the core of their representations, whether the friendships be driven by judgement and passive-aggression, outward hostility and arrogance or say-it-as-it-is support.

Like the supporting players in their lives, the Wong family women have their own idiosyncrasies and insecurities. Instead of being a caricature, as could so easily have been the case, Pearl is portrayed as a proud and loving mother (albeit without a filter), strong, self-sacrificing and generously resilient. And Hsiao-Ling Tang again gives the character strength on show to her family, but also a natural vulnerability in acceptance of the misfortune of her fate.

Although the sisters are more than a decade apart in age, their interplay is engaging in its authenticity, especially when an argument escalates to a no-bold-barred spill of secrets to their mother. Not only is she entertaining in sibling interaction, but Michelle Law plays Zoe’s scene as a nervous blind-dater to awkward comic perfection. And Courtney Steward is consistently strong as younger sibling Mei, a stubborn teenager full of melodramatic angst in response to confused feelings around identity that see her attempting to anglicise herself out of embarrassment about her Chinese family. Patrick Jhanur is solid as a potential nice-guy partner for Zoe and once again Emily Burton creates some of the night’s biggest audience responses through her perfect tone and comic timing as Mei’s quirky, supportive best friend Katie.

As in its debut run, this Single Asian Female celebrates its cultural experience with music and laugher along with its heart… a winning combination that features at the core of many of the family stories that resonate the most. And the work is clearly evolving; not only does this run feature some different actors, but more edits and new jokes. And given that its Marie Kondo nod gets one of the night’s biggest laughs, the result is a show that is as delightful and dynamic as ever, tighter than its original incantation, if not quite as freshly vibrant. 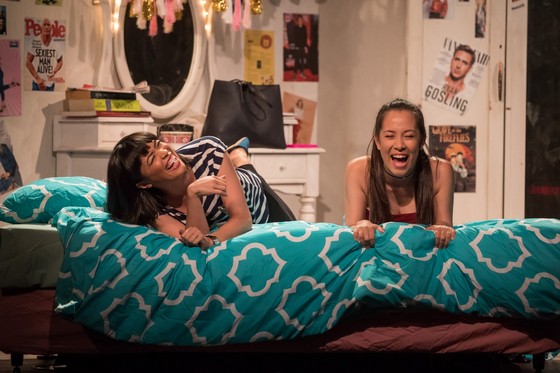 Single Asian Female not only represents a cultural landmark, but is a vital reminder of how and why we need to see all stories on stage. There is so much nuanced detail, heart and humour to Michelle Law’s script and Claire Christian’s direction that the characters and scenarios are relatable not only to second generation Australians, but to anyone who has grown up in this country. While there are touches of the political within its dialogue, this is not an overtly politicised, but rather, a very human, family story, full of affection for its characters. The result is an immensely watchable show that seems to fly by in the quickest of times, despite the notorious discomfort of the La Boite seating. This is a theatre experience at its easiest, ideal for audience members who may not be regular theatre goers, but will likely fall in love with the characters, their stories and hopefully the event of live theatre in general.