As big, loud and flamboyant as its subject, Rocketman presents Elton John as a not-so-stable genius. If you want loads of Elton’s songs, extravagant costumes and a long spiral into depression, this is the movie for you. If you’re looking for a different take on the rockstar biopic though, you might have to look somewhere else.

Director Dexter Fletcher (who worked on Bohemian Rhapsody after Bryan Singer was fired) tries hard, but can’t break free of Lee Hall’s script. Hall (Victoria & Abdul) very much follows the template of movies like Ray, Walk the Line and Dream Girls. With different music, this could be any one of those movies. Hall seems to have envisaged the film as part-musical, part-concert video and part-straight drama. It’s an odd mix. Still, Fletcher at least injects some memorable scenes into the otherwise by-the-numbers story. 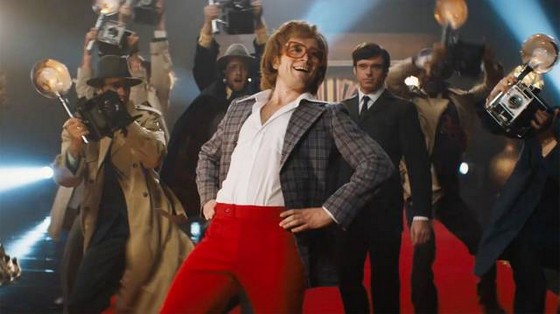 For those familiar with Elton’s career, Rocketman concentrates very much on the earlier part of it. Leaving aside the bits from his childhood, it covers roughly the years from 1971 to 1991. The end credits fleetingly mention in his later (non-musical) work. Some significant stuff – like his friendship with Princess Diana – isn’t mentioned at all. But it covers probably his most prolific and memorable musical period.

Told mostly in linear fashion, the film touches on Elton’s troubled childhood as Reggie Dwight, his meeting with Bernie Taupin (Jamie Bell) and his rise to fame. In the second half however, the film concerns itself with his descent into addiction and madness. So if you think this is going to be all funny costumes and danceable tunes, think again. Also, definitely don’t take your kids thinking they’ll like the classic pop tunes; and think twice about whether your aged parents are going to enjoy a dive into darkness before you invite them.

It’s worth noting that Elton John himself is an executive producer on the film and was heavily involved in its production. That it’s actually so unflattering earns him a big tick in my book. It’d be easy to sugar-coat the reality (yes, Bohemian Rhapsody, I’m looking at you). But Elton has been brave and insightful enough to allow the ugly truth to come out on screen.

Rocketman owes a huge debt to production designer Marcus Rowland. He recreates the time periods brilliantly. But he and costume designer Julian Day go all-out in re-producing Elton’s outrageous stage-wear. A sequence in the credits shows just how unbelievably accurate they are.

The thing that gets Rocketman off the launch pad is a powerhouse performance from Taron Egerton. After the abysmal Robin Hood, he needed to bounce back – and does so with style. From energetic stage performances to delving into Elton’s many foibles, Egerton is outstanding in every way. He also performs a remarkable physical transformation over the course of the film. That he also does his own singing is a bonus.

Jamie Bell is a little bland as Taupin; though I suspect that was intentional. Alongside the “big” Elton, someone has to be “small”. John Reid impressed as the suave but pitiless John Reid, Elton’s one-time manager and lover. Bryce Dallas Howard does her best British accent in a largely thankless role as Elton’s rather awful mother Sheila.

So Rocketman is an uneven experience. Flashes of brilliance struggle to overcome pedestrian plotting. I can’t say I really warmed to it, but I liked it well enough. I suspect none of that will matter for many viewers though, who’ll see it for the songs if nothing else.