Queen Victoria formed an attachment late in life that brought the royal household to the point of apoplexy. That true story is given poetic licence in Victoria & Abdul.

In 1887, Abdul Karim (Ali Fazal) – a 24-year-old clerk – travelled from India to the UK to present a ceremonial medal as part of the Queen’s Golden Jubilee. Told not to make eye contact with the monarch (Dame Judi Dench – Shakespeare in Love), when he does that one action has surprising consequences. Karim finds favour with the generally surly and by then elderly Queen. The unprecedented and unlikely relationship causes a battle royale within the royal household, pitting the Queen against court and family. 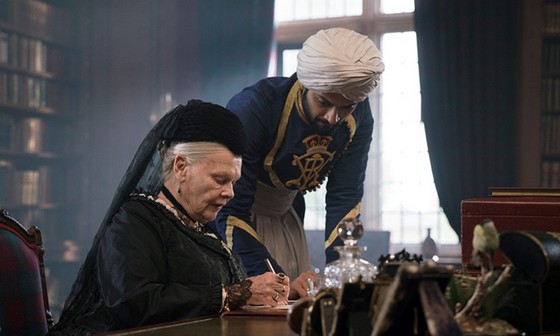 Victoria & Abdul humorously explores questions of race, religion, power and the farce of Empire through the prism of a highly unusual and deeply moving friendship. The screenplay is by Lee Hall (Billy Elliot), based upon journalist Shrabani Basu’s book Victoria & Abdul: The True Story of the Queen’s Closest Confidant. It was that novel that brought to life – from their own diaries and journals – the long-hidden history of Victoria and Abdul.

In 2001 Basu was researching a book on the history of curry. She learned that Queen Victoria enjoyed eating curries. Basu visited Osborne House, Victoria’s Isle of Wight residence, and was intrigued to see two portraits and a bronze bust of a regal-looking Indian man. In Victoria’s dressing room, she spotted another portrait of the Indian man. On a larger scale, Osborne’s Durbar Room, crammed with treasures from India, was a monument to Victoria’s fascination with what was known as “the jewel in the crown”.

Even though she was the Empress of India, the Queen never visited. Basu notes that “for safety reasons, she couldn’t go to India, so she had India come to her.” In 2006 she visited Balmoral, the Queen’s castle in the Scottish Highlands, where she saw Karim Cottage, the house that Victoria built for Abdul. She realised there was an importance to the mysterious Indian man known as the Munshi (which translates as “teacher”) and she set herself the task of finding out what that was. The Queen’s son Bertie, later King Edward VII, had destroyed all correspondence between his mother and the Munshi, but had not thought to touch her Hindustani journals. In those journals, Basu discovered the story of Queen Victoria and her beloved Munshi, Abdul Karim.

Handwritten by Victoria in Urdu, the 13 journals had sat in the Royal Archive, entirely left out of any and all Western versions of Victorian history because none of the historians read Urdu. There was one further volume to be unearthed, as Basu’s investigation took her to Karachi in Pakistan. Abdul never had any children, but his grandnephew led her to a diary, stored in a trunk. Abdul had started it in 1887, when he was summoned to England. His diary gave Basu a first hand account that confirmed much of what she had found in the Queen’s Urdu writings.

Although sumptuous in look (the sets and settings are a feature – Danny Johnson, who did a similar job in the movie Florence Foster Jenkins, is the cinematographer), the feel good approach is too exaggerated to ring true. For all intents and purposes what we are fed by director Stephen Frears (The Queen) is black and white. Victoria & Abdul lacks nuance or subtlety, whether that be in its humourous or dramatic moments. The supplementary characters are, by and large, made to look like buffoons or caricatures. The incredulous looks and carefully chosen words of the senior household staff and office bearers do bring mirth. But then some of the dialogue and the script as a whole is heavy handed.

The impact of the film would have been greater and the movie more meritorious had that not been the case. Dench is her usual reliable self, adopting a persona not to be trifled with. Fazal pours on the charm as her respectful servant. I dare say many will find Victoria & Abdul inviting … in the vein of The Best Exotic Marigold Hotel, notwithstanding its evil underbelly, namely racism.