Aladdin is loosely based on a tale from “One Thousand and One Arabian Nights”. This lavish production features magnificent sets and costumes. But this live-action version doesn’t measure up to the spectacular 1992 animation.

The streets of Agrabah are home to Aladdin (Mena Massoud), a lovable street rat who is eager to leave his life of petty thievery behind. Across town, the Sultan’s daughter, Princess Jasmine (Naomi Scott), harbours dreams of her own. She longs to experience life beyond the palace walls and use her title to better serve the citizens, but her father (Navid Negahban) is overprotective. He’s intent on finding a suitable royal partner for her. But his advisor, Jafar (Marwan Kenzari) is a snake-in-the-grass, desirous of the throne for himself. 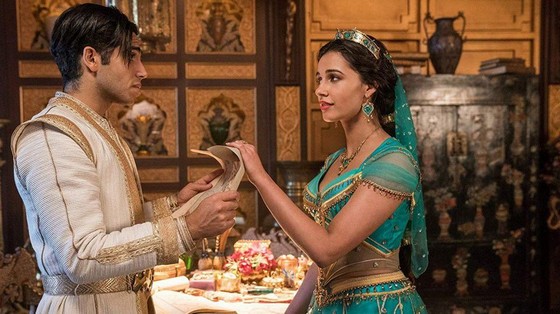 Aladdin first meets Jasmine when he comes to her rescue after she visits the Agrabah marketplace disguised as a commoner. He is immediately struck by her beauty and fiery spirit, having no idea of her true identity. Following her back to the palace, he gets caught up in Jafar’s evil scheming. He comes into possession of a magic oil lamp intended for Jafar and accidentally conjures up the Genie (Will Smith) inside, which entitles him to three wishes.

When I first saw the 1992 version featuring the voice of Robin Williams as Genie, I thought it was the best animated feature I’d seen. It wasn’t until Toy Story came along three years later, that I felt it was bettered. Will Smith has taken over Williams’ pivotal role and while he cracks a number of jokes and plays out some sight gags, he’s serviceable rather than brilliant. He tries hard, but for one thing he’s not a singer. His singing voice barely passes muster.

Aladdin circa 2019 is more about the power of visual effects and visualisation than it is about compelling story telling. The writers are John August (Charlie and the Chocolate Factory) and Guy Ritchie (The Man from UNCLE).

I enjoyed and appreciated the clean-cut Mena Massoud as Aladdin and Naomi Scott as the beautiful, intelligent and empathetic Princess Jasmine. Not so much Marwan Kenzari as the evil and manipulative Jafar. I felt he lacked vocal gravitas. As far as rubbing the lamp and wishes were concerned, it all got a bit confusing as to what were counted as wishes and what Genie handed out as freebies.

Aladdin feels long at 2 hours and 8 minutes. Guy Ritchie’s needed to tighten his direction or get a lot more ruthless in the editing suite. It’s bright, colourful and energetic, but I still felt let down. I dare say younger audience members who didn’t see the original will get more out of it than I did.