Much like Tom Stoppard’s Rosencrantz and Guildenstern are Dead, Australian director Claire McCarthy’s Ophelia concentrates on a relatively minor character in Shakespeare’s Hamlet. But unlike Stoppard’s absurdist play, this film is basically a re-telling of Hamlet from Ophelia’s perspective – with a few twists thrown in.

McCarthy directs from Semi Chellas’ screenplay, adapting Lisa Klein’s novel of the same name. The result is a compelling re-imagining of the classic tale. Fans of Shakespearean drama may bristle at the modernised language, but will surely warm to the film’s clever but faithful take on the original. Incidentally, this is the second Hamlet-themed film to be released in few weeks; after The Lion King, which is of course “Hamlet with fur”. 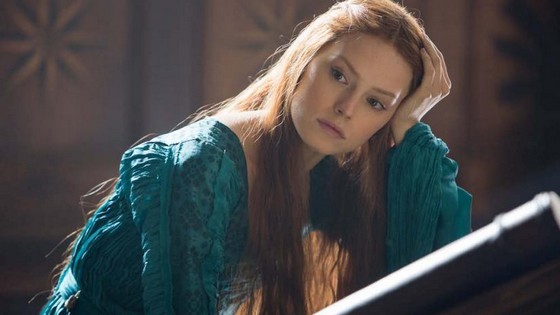 The film opens well before the events in the play, as Queen Gertrude (Naomi Watts) takes a young Ophelia into the royal court to save her from poverty. Many years later, Ophelia (Daisy Ridley) is one of the Queen’s ladies-in-waiting, though her low birth makes her a target for other courtiers. Meanwhile, Ophelia’s brother Laertes (Tom Felton) has also worked his way into court as a student. He helps Ophelia learn to read, a skill that will prove handy later. But Ophelia’s beauty soon catches the eye of Prince Hamlet (George MacKay). Though she initially spurns him, she soon changes her tune. With Hamlet away at university, Ophelia becomes closer to the Queen, who shares a secret with her. The Queen is seemingly addicted to a potion that can only be procured from a “witch” named Mechtild (also Naomi Watts) who lives deep in the woods outside Elsinore. She sends Ophelia on an errand to get more.

Meanwhile, Hamlet’s uncle Claudius (Clive Owen) is plotting. His relationship with Hamlet is fraught, but he sees an opportunity in the Queen. Soon the King is dead. The elders elect Claudius as the new king, perhaps reasoning Hamlet is still too young. But Claudius goes too far by marrying Gertrude. Hamlet meanwhile secretly marries Ophelia. The prince however remains incensed at his uncle’s actions, and vows revenge. But Ophelia worries he will go too far.

The plot of Hamlet is famously convoluted, and that leaches into Ophelia also. The added layer provided by the Mechtild character (necessary to provide the surprise twist at the end) makes things even more labyrinthine. I admit I had some trouble following along at points, but McCarthy cleverly draws the disparate threads together at the end.

I – perhaps oddly – found the updated language distracting and a bit weird at first. But like Shakespearean language, once I got used to it, the film flowed a lot better for me. Indeed, the updating of Laertes’ farewell speech is a little gem of genius. I also enjoyed McCarthy’s diversions into folklore and fairy tales – Little Red Riding Hood being an obvious one. The film also heavily references John Everett Millais’ iconic Pre-Raphaelite painting (previously used notably in Lars von Trier’s Melancholia). Steven Price (Baby Driver) propels the action with an impressive score.

If anything lets the film down, it’s the relationship between Ophelia and Hamlet. As noted, the script calls for Ophelia to shun Hamlet’s advances initially. I don’t know if a scene may have been cut, but she seems to come around to love him very quickly; something that didn’t ring true for the character.

Daisy Ridley – free from blasters and bots – gets to stretch her acting chops here as the title character. Her performance is eye-catching; especially in the more flamboyant scenes toward the end. Naomi Watts is excellent in double-duty as the Queen and the “witch”. Plainly meant as two sides of the same coin, she delivers in both roles. The weak links though were the men. I thought Clive Owen was over-the-top as Claudius (luckily he didn’t have a moustache to twirl); while George MacKay was a bit milquetoast as Hamlet. Comparisons with the benchmark Zeffirelli version (1990) with Mel Gibson as Hamlet and Alan Bates as Claudius are perhaps unfair but inevitable.

Despite taking a while to warm to it, I was impressed by Ophelia. McCarthy and her team deliver an intriguing film, full of nuance and allusion. If you’re a fan of Shakespeare, this film has all the grand themes of the Bard. But it also makes them more accessible for a younger audience.