Marjorie Prime is an American play by Jordan Harrison, that was a finalist for the Pulitzer Prize in 2015.

The play is set in the mid-21st century. Tess (Lucy Bell) is caring for her ageing mother Marjorie (Maggie Dence). Marjorie is beginning to experience a creeping dementia. Jon (Richard Sydenham), Tess’ husband, has contacted  a robot company, and organised a “prime”. A prime is a fully personalised look-alike. 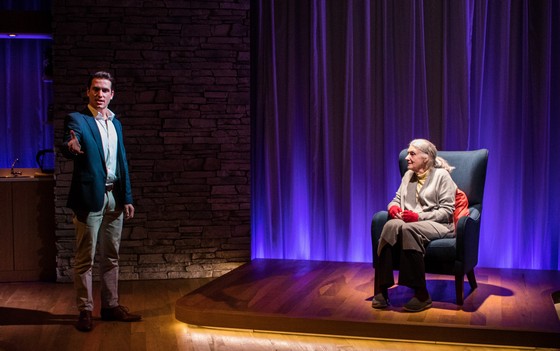 They have created Walter Prime (Jake Speer) for Marjorie. This prime looks like her husband did when he was thirty and has been fed memories to be able to converse with Marjorie. It is a very unsettling concept and leads to not always lucid or truthful conversations. After all Walter Prime can only speak what he has been ‘fed’ – other people’s memories and needs. The Rashomon effect is on full display. We all have variants of what is the truth.

Marjorie dies; and Tess is then given a prime called Marjorie. This Marjorie Prime has been fed the detailed memories that Tess needs so she can say things she never said to her mother – for instance, that she had loved her. When Tess dies, Jon has a prime called Tess commissioned.

All three primes spend some time together and regurgitate what their information bank has been given. The cross conversations are idealised versions of the past – and not always congruent.

This play isn’t so much about the development of Artificial Intelligence and its possible flaws (though, of interest). It’s more concerned with the anxiety of loss of cognition and the inevitable experience of death. It dwells in the world of grief and regret. Of guilt. Of secrets kept invisible, stored in a Pandora’s Box to facilitate amnesia of events that all have found traumatic. Loss of love. Lack of love. Suicide, for instance.

The beautiful set, designed by Simon Greer, looks like a gentle projection of order in anordinary home in the near future. He’s gloriously assisted by the possibilities of a lighting design for modern living by Alex Berlage. Director Mitchell Butel has staged the production with care. Composer Max Lyandvert crafts an intriguing accompanying score that creates an atmosphere that’s a sensitive contrast to the off-kilter happenings of the play. 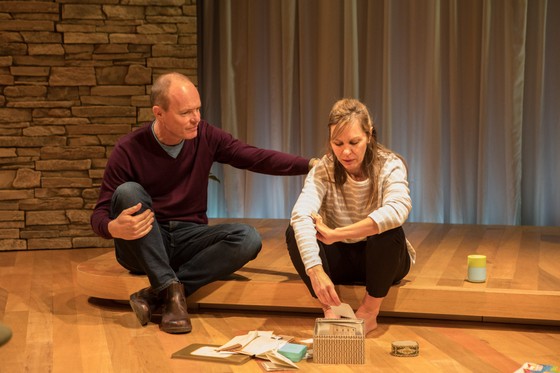 Ms Bell’s neurotic and ‘injured’ Tess is lightly balanced by the very sensitive reading of Jon by Mr Sydenham. Jake Speer has the looks of an idealised partner and handles the physical life of this Prime with subtle details. Ms Dence has created a Marjorie that just avoids cliche but not entirely owned.

This is a gently provoking (maybe creepy) play that indicates our projected memories maybe our best acts of love. A love to protect ourselves in the lonely experience of journeying close to the end and needing to be loved back. How lucky it would be, if we all were. These imagined science fiction primes just might facilitate that luxury and romantic escape! Or, not.