Unqualified is a new Australian play nurtured and commissioned by the Ensemble Theatre.

Joanne (Genevieve Hegney) has found her TV star husband is heading to bankruptcy – and to Bali with his latest girlfriend. Enough is enough – this relationship MUST end. Felicity (Catherine Moore) has worked as a butcher in her father’s meat business and does not want to inherit it – she secretly hates it. How can she tell her dearest, darling Dad? 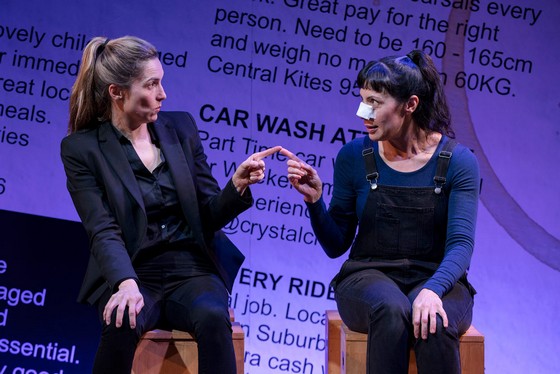 These two desperately co-dependent women literally crash into one another at Centrelink. Through diverse and mysterious ways – no pressure from Felicity – decide to set up a small business of their own – an employment agency. They get some jobs but they have no employees and so take them on, one by one, themselves. From child minders, to wedding organisers to drama class leaders, they display their lack of qualifications hilariously.  ‘Adventure’ after ‘adventure’ leads to an almost complete ‘breakdown’ of exhaustion and antagonism.

Originally written by the two actors, Ms Hegney and Ms Moore, as a six-part television show, they have been in the ‘loop’ of creative possibility for a couple of years with various television forces. The Ensemble Theatre’s Artistic Director, Mark Kilmurry, heard about the project, and encouraged them to write a play from their material.

Six episodes and fifty-odd characters simmered down to 90 minutes and two characters. Janine Watson was brought on board to direct. And, guess what we have? – a terrific night in the theatre. The writing is comfortably funny. Even at this length it could bear some trimming. And although dramaturgically it doesn’t make its point as clearly as one would want, the Ms Hegney and Ms Moore have such complete trust in one another. They spark such chemistry that the time in the theatre zips by. 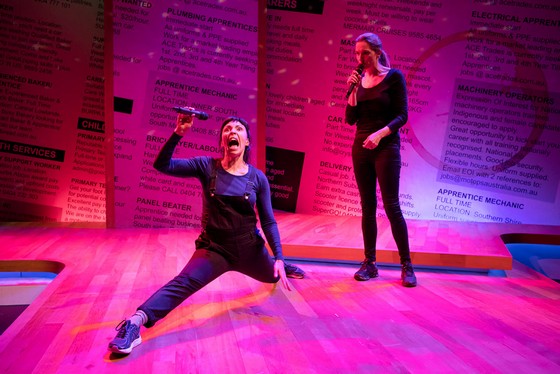 Intelligently utilising the set design for the other current production, Marjorie Prime, Simon Greer has created a large back wall job vacancy bill board and with a minimum of furniture and props. With a new lighting design by Alex Berlage, this creates a very flexible space for these two actors to create many environments for the fun.

Unqualified is a comedy from ‘girl-power’ or to be more respectful and politically correct, perhaps, ‘woman power’, thanks Ms Hegney, Ms Moore and Ms Watson, especially. Let’s hope the television bosses catch on to what they’ve been offered and missed.

Unqualified plays at the Ensemble Theatre, Kirribilli, till 21 July 2018.