In these days of instant communication, you have to come up with a pretty good reason for a road trip. The creative team behind Kodachrome have done so by going old-school. The result is a film yearning for a golden past that – perhaps – never existed. 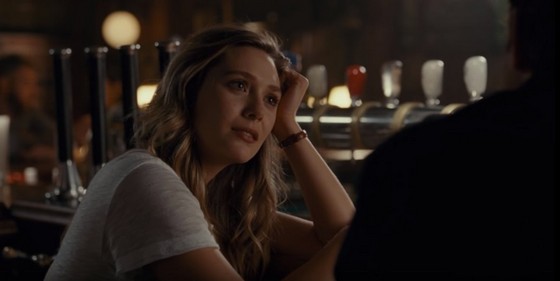 Matt Ryder (Jason Sudeikis) is a music executive in trouble. He’s getting to a point where his successes are behind him. His job is hanging by a thread and he needs a big signing to keep his career going. In the midst of this career crisis, Zoe Kern (Elizabeth Olsen) walks into his office. After some initial confusion, Zooey reveals she’s the carer for Matt’s ailing father Ben (Ed Harris). Now Matt hasn’t even seen Ben in a decade and isn’t very keen on having anything to do with him now. Ben is a famous photographer, but he’s refused to go digital. Now he wants Matt to drive him (he’s too sick to fly) to have four precious rolls of Kodachrome film developed. The clock’s ticking because the lab in Kansas is closing (the chemicals needed for the process are being discontinued).  Matt refuses to go, but when Ben’s manager Larry (Dennis Haysbert) throws him a career lifeline if he does, he reluctantly agrees. So Ben, Matt and Zooey jump in a convertible for the long trip from New York City to rural Kansas.

Nostalgia never goes out of style, and you can see it seeping through the patina of this film. Screenwriter Jonathan Tropper and director Mark Raso also delve into the history between Ben and Matt. Dirty laundry is (predictably) aired. All of this is fine, except that both Topper’s script and Rasso’s direction beat you over the head with it. You can see the film’s cogs turning, and there’s little doubt where it’s going to end up.

The backstory about discontinuing Kodachrome film processing is based in fact; though it serves here as a fairly obvious metaphor for a simpler, more “real” time when the Internet and mobile phones didn’t exist. Again, I don’t have a problem with that angle, but the film doesn’t so much bathe you in the golden glow of that simpler time as lecture you about your current choices.

But if you feel manipulated on the trip to Kansas, wait till the end, when it’s really laid on thick.

For all that though, there is a lot to enjoy here. DOP Alan Poon (shooting on actual Kodachrome film, in a very meta twist) captures some stunning images, but transitions just as easily to claustrophobic interiors.  The indie-rock soundtrack (augmented by Agatha Kaspar’s original score) counterpoints the action neatly.

Jason Sudeikis (Downsizing) steps briefly away from comedy for the role of Matt and does a decent job. He’s very watchable, although perhaps doesn’t really explore the breadth of the character. Elizabeth Olsen’s (Avengers: Infinity War) Zoe is sadly underwritten and ends up as a predictable love interest. While Olsen’s performance is fine, the character could have been much more. But Ed Harris (Mother!) really dominates every frame he’s in as Ben. His performance just exudes class. Look out for Bruce Greenwood, Dennis Haysbert and Wendy Crewson in smaller roles.

Kodachrome is one of those movies I wanted to like, but which put me off. If you like nostalgia and sentiment, this may be more up your alley. For me though, while it had many fine qualities, the film’s self-conscious manipulation was a turn off.