We know that writer and director Darren Aronofsky (Black Swan) likes pushing the envelope, but with Mother! he goes way beyond the pale. Jennifer Lawrence plays a young woman deeply in love with a significantly older man, her husband Javier Bardem, a poet with a severe case of writer’s block. He once wrote a best seller, but any semblance of ideas appear to have dried up. They live removed from society in the remote country home where Bardem grew up. The house burnt down, but Lawrence has painstakingly recreated it – work she has found most satisfying. She values their solitude, but Bardem can be flighty.

One day, a man purporting to be a doctor (Ed Harris) – a specialist no less – arrives on their doorstep. A heavy smoker who is decidedly sickly, Bardem not only invites Harris in, but tells him to stay the night, much to Lawrence’s chagrin (after all, he is a stranger). The next day, Harris’ wife (Michelle Pfeiffer) arrives. She is nosy and opinionated. Lawrence’s desire for peace and tranquility is upended, but far worse is to follow. 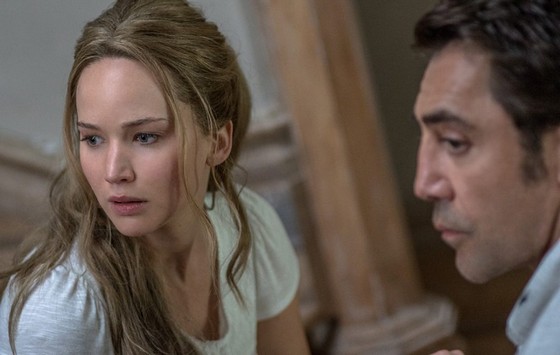 This is an exercise in the lengths of ridiculousness to which one can go before turning off an entire audience and losing any sense of reality in the process. Egotism knows no bounds for Bardem’s character and you might argue the same about Aronofsky for what he has “crafted” (and I use that word advisedly) and tried to shove down our throats here. Lawrence does all she can with the material with which she has to work (in fact, she does work hard at crafting her character) and I appreciated the aloof bitch portrayal of Pfeiffer.

Cinematographer Matthew Libatique (Black Swan) has done a fine job creating an atmosphere of unease with the use of close ups. The soundscape and cinematography ensure the discomfort is there from the opening scene. Just why the acolytes gravitate to Bardem in the numbers that they do and fawn all over him before going on a destructive bender is never adequately explained.

No poet I have ever been aware of has ever received such treatment. Nor do we understand why Lawrence is so scared of being left alone. If the first half antics of Harris and Pfeiffer (and their sons) doesn’t push the boundaries enough, we’re back there for far, far more in the second act when the gloves are off. By the final credits it was dead set easy to loathe the two hours that had gone before it.

Far from being just plain mysterious, Mother! ends up being complete and utter crud.