Director Francis Lawrence re-teams with star Jennifer Lawrence (no relation) for Red Sparrow. But where their previous success were in the YA-friendly Hunger Games trilogy, this film is a far darker – and more adult – proposition.

Lawrence (the director) has given his lead actor an intricately crafted spy thriller in which to strut her stuff as one of the biggest movie stars on the planet. This is more akin to a John Le Carré thriller than a dystopian teen drama. His attention to detail however is sometimes Red Sparrow’s undoing. 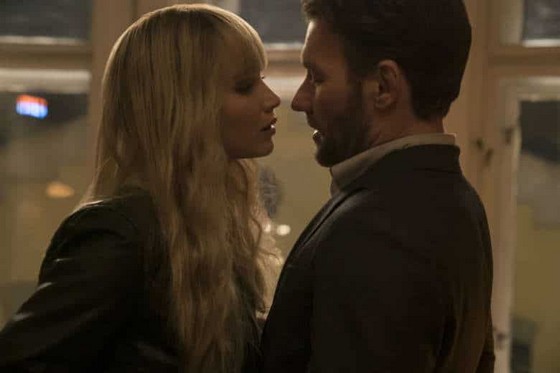 Dominika Egorova (Jennifer Lawrence) is a dancer with the Bolshoi. But an on-stage accident leaves her leg shattered – and her dancing career over. Her sick mother (Joely Richardson) needs medical attention, and the loss of the Bolshoi’s patronage leaves them with the prospect of no medical care and no home. But seemingly kindly Dominka’s uncle Vanya (Mattias Schoenaerts) – I suspect the name is no accident – offers her a chance. He wants her to work for him at the SVR, Russia’s spy agency. After a “trial run” goes well, Dominika is sent to “Public School No. 4”; a Russian spy school with some unusual – and occasionally brutal – methods.

Meanwhile CIA operative Nate Nash (Joel Edgerton) has been sidelined after a meeting with a top secret “mole” in the Russian government went south. He hopes that a return to Europe will draw out his valuable “asset” and re-establish the “line” into the Kremlin. But with the SVR onto him, a return to Russia is impossible. So Nate sets himself up in Budapest. There he will cross paths with Dominika on her first mission as a fully-fledged SVR agent.

Red Sparrow is based on the book of the same title by Jason Matthews, an ex-CIA agent himself. In fact Matthews wrote a sequel, with a third book planned. It comes as no surprise then that the film self-consciously sets up a sequel of its own. Justin Haythe (Revolutionary Road) supplies the screenplay. I’m not sure Haythe needed to cram quite so much into it though. The film clocks in at a hefty 140 minutes, and while I appreciated Dominika’s lengthy back-story and the many twists in the plot, others will not be so patient.

Haythe employs the screenwriting device of dropping obscure clues; then tying them altogether with a big reveal at the end. The Sherlock TV series uses a similar format. When that reveal comes, it’s a big one. I frankly did not see it coming at all. I wasn’t however convinced by some other aspects of the plot. The time period, for example, is a bit fuzzy (who still uses floppy discs?); and the characters pretty much all speak English, so working out who’s on which side can be difficult at times.

Francis Lawrence directs with some style, but his approach sometimes weighs the film down. He seems very keen on the more salacious aspects of the story, and lingers uncomfortably in some scenes. No doubt all that was in the book, but part of a director’s art is to know what to leave out. Just so you know, Red Sparrow contains several scenes of violence, some of them quite graphic. There are also two very unsettling torture scenes.

Red Sparrow, whatever its flaws, succeeds in one important respect – it gives Jennifer Lawrence a platform to spread her acting wings. Dominika is a complex character, and Lawrence delivers a powerhouse performance in the role. Joel Edgerton (Loving) however is a little bland as Nash. Matthias Schoenaerts (A Bigger Splash) impresses as the disagreeable Vanya. The remainder of the cast features well-known names and faces including Charlotte Rampling, Ciaran Hinds, Mary-Louise Parker and Jeremy Irons.

Red Sparrow is one of those films I enjoyed because it didn’t deliver everything on a platter. It requires something from the audience. Whether audiences want to be challenged in that way will be revealed at the box office. Although I had a few quibbles with some aspects of it, this is a film for those who enjoy a hard-edged, intellectual spy thriller.