It’s a small world after all in Downsizing.

In the not-too-distant future, Norwegian scientist Dr Jorgen Asbjonsen (Rolf Lassgard) comes up with a radical solution for over-population. He and his colleagues have figured out a safe way to shrink people down to 12 centimetres, thus reducing their footprint on the world. 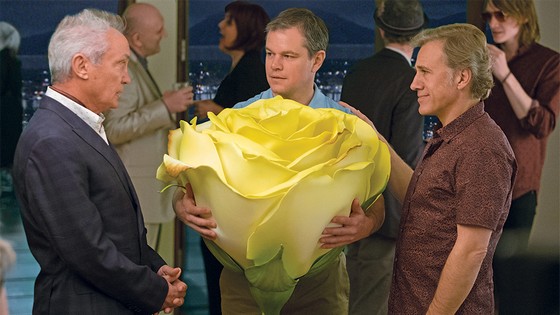 Paul Safranek (Matt Damon), a mild-mannered occupational therapist in mid-life crisis, and his unhappy wife Audrey (Kristen Wiig), decide to allow themselves to be shrunk. They plan to live in Leisureland, a utopian micro-community with golf courses, swimming pools and shopping centres. But what seems like an egalitarian society in the advertising material soon shows its darker side. The worst excesses of American culture and its rampant consumerism soon emerge. Most people still dwell in their McMansions, albeit on a smaller scale, and still live their excessive lifestyles. There’s a clear social divide between the haves and the have-nots in this miniature environment. Rich people who live in luxury homes, while the menial workers who service them live in a walled-off enclave. They subsist in squalid, cramped apartment buildings on the edge of the city.

When Audrey decides not to go through with the process, Paul moves out of his luxurious house into an apartment building. There he meets his boisterous, hard partying neighbour Dusan Mirkovic (Christoph Waltz) and his slightly sinister brother Konrad (Udo Kier). Paul also becomes obsessed with Mirkovic’s Vietnamese house cleaner, the dynamic but grating Ngoc Lan Tran (Hong Chau). She’s a dissident refugee and amputee with a prosthetic leg. She challenges Paul to see life from the perspective of the impoverished. And before long he’s heading off on a journey of self-discovery to Norway to visit the original miniature community.

An interesting concept drives this risky but ultimately uneven satire from director Alexander Payne (Sideways). Payne co-wrote the film with his long-time collaborator Jim Taylor. The idea had plenty of opportunity for rich satire and social commentary, but it quickly runs out of steam. Much of the social critique falls flat. There’s an episodic quality to much of what follows, and the film moves from the broader comedy of the opening scenes to a somewhat bleak and pessimistic tone. The moralising is laid on with a trowel.

Payne introduces a lot of subplots, but many go nowhere interesting, which leads to a sense of frustration. The film loses inspiration and ideas long before we leave for Norway.

Downsizing is one of Payne’s lesser efforts. Seems as if even he wasn’t sure what direction he wanted to take the concept.  Films like Honey, I Shrunk the Kids and Innerspace used the concept of shrinking people in far more inventive and entertaining fashion.

Kudos has to go to Stefania Cella and special effects supervisor James Price for their inventive production design though. And there are some great special effects in the early scenes when we’re first introduced to the first people to be shrunk to miniature size. Payne’s regular cinematographer Phedon Papamichael cleverly juxtaposes both real size people with miniature people in the same shot.

Damon’s performance as Paul is solid enough, and he suffuses his character with an essential decency. But he often seems uncomfortable with the sort of downtrodden character who has become a staple of Payne’s films. Chau (Inherent Vice) delivers a lively turn here. Her scene-stealing performance is easily the best thing in the film – even though her character is annoying, and I felt like strangling her on several occasions. Waltz plays yet another variation of his familiar screen persona. Although he brings a sense of energy and mischief to his performance he is almost becoming a parody of himself. There is plenty of droll interplay between Waltz and Kier that provides some brief spark. There are cameos from the likes of Jason Sudeikis, James Van Der Beek, Neil Patrick Harris and Laura Dern; but they add little to the overall material.

Downsizing runs for an overly long 132 minutes and becomes boring the longer it goes on. Maybe a bit of downsizing in the editing suite may have made for a better film.