What is it about artists’ tendency to self-destruct? We’ve seen that in documentaries about the likes of Amy Winehouse and Brett Whiteley. Now it’s street artist Anthony Lister in Have You Seen the Listers?.

There are times while watching these types of films that you want to ask the subjects what the heck they’re doing. The irony is that they spend all this time pining for what they had, but only have themselves to blame for kissing it all goodbye. In other words, is artistic success and excellence worth the destruction of one’s personal life? 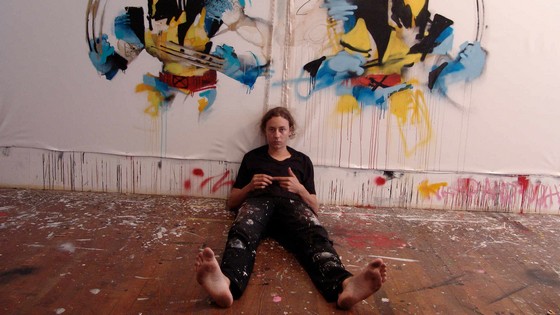 I knew nothing about Anthony Lister when I entered the cinema, but I am a whole lot wiser now. He’s known for challenging conservative Australia, for rustling feathers in his native Brisbane. We witness his rise and frequent falls. Born in 1979, he completed a Fine Arts’ degree at the Queensland College of Art. He helped pioneer the stencil and street art movement in Brisbane before moving to New York in 2003.

It’s hard to categorise his art because it seems to be constantly evolving. From superheroes to ballet dancers, he paints, he draws and he creates installations. He consistently exhibits around the world. In 2010 Art Collector Magazine named him as one of this country’s 50 most collectable artists.

Lister kept amazing an amount of footage of his personal life. This gives us a visual insight into his growth and maturation. He came from a broken home. He fell for the girl who later became his wife while still at school. By all accounts they had a great thing going, and had three children. But then his self-destructive lifestyle put paid to all that.

Among the personal stuff is a lot of creativity. The film explores how Lister he went from an impoverished artistic wannabe to a world acclaimed modern painter, forever wanting more. We see how his style changed over the years and the phases he went through. We also witness some of the battles he fought against the establishment and drugs. It is all compelling stuff and beautifully put together by director Eddie Martin (Lionel).

For all the mealy-mouthed words Lister uses, I couldn’t help feeling that he never learns. He appears to go from one self-destructive episode to the next. In other words, his life – notwithstanding his artistic achievements – has been one big personal stuff up. The train wreck makes for compelling watching. But to me it’s just plain sad that a guy with more talent than most would empower his demonic side.