In 1986 a science fiction movie called Short Circuit introduced us to a robot called Number Five, which became sentient and hence one of its expressions was “Five Alive”. I was reminded of that when I saw the new Australian musical Electric Dreams, which was actually inspired by another movie, which carries the same name. The film Electric Dreams – released in 1984 – concerns an artificially intelligent PC and his human owner who find themselves in a romantic rivalry over a woman.

Set in San Francisco in 1984, Electric Dreams: The Musical, concerns the relationship between a nerdish tenant, Miles (Tom Green) and his first computer. He names it Edgar (the voice of Owen James). Edgar takes on human characteristics and stalks Miles, whom he calls “Moles” because Miles had incorrectly typed his name during initial set-up.

More than that, Edgar disrupts Miles’ life and his newly formed romantic liaison with his neighbour, Madeleine (Madeleine Featherby). She is a classical cellist who has moved from New York after the ugly breakdown of a previous relationship.

Miles’ computer gobbles up knowledge and within days is composing music. Madeleine hears it and believes it to be the work of mild-mannered architect Miles. When he doesn’t dispute that, Edgar grows jealous and then angry. Edgar wants to understand what love is and would like Madeleine to love him.

So, as I am sure you can appreciate from what I have just written, Electric Dreams has a zany storyline, which is also fun and a touch romantic. The three leads in the 10-person cast – including Madeleine’s best friend Millie (Angela Scundi) – have strong and melodic voices and good stage presence. I also greatly appreciate the efforts of Owen James in “voicing” the computer. He does a fine job giving us a “jerky” sound.

All but the final song – not surprisingly the hit “Together in Electric Dreams” by Phil Oakey and Georgio Moroder – are original numbers by the musical’s writer and composer Drew Lane.

It took me a while to warm to what I was seeing, but once I did I thoroughly enjoyed the kooky tale of envy. My only real reservation is the set, which doesn’t do the musical justice. I speak of two tiers and I am not at all convinced the second tier – basically just scaffolding – is necessary or adds anything other than confusion. Why bother to climb up stairs just for the sake of it?

More than that, the centrepiece of the action – smack bang in the middle of everything, so impossible to avoid – is a dirty great big grey mottled screen. It is slightly closed, like a picture book, surrounded by a cream marble border. Onto that is projected barely decipherable imagery and fuzzy green computer text. 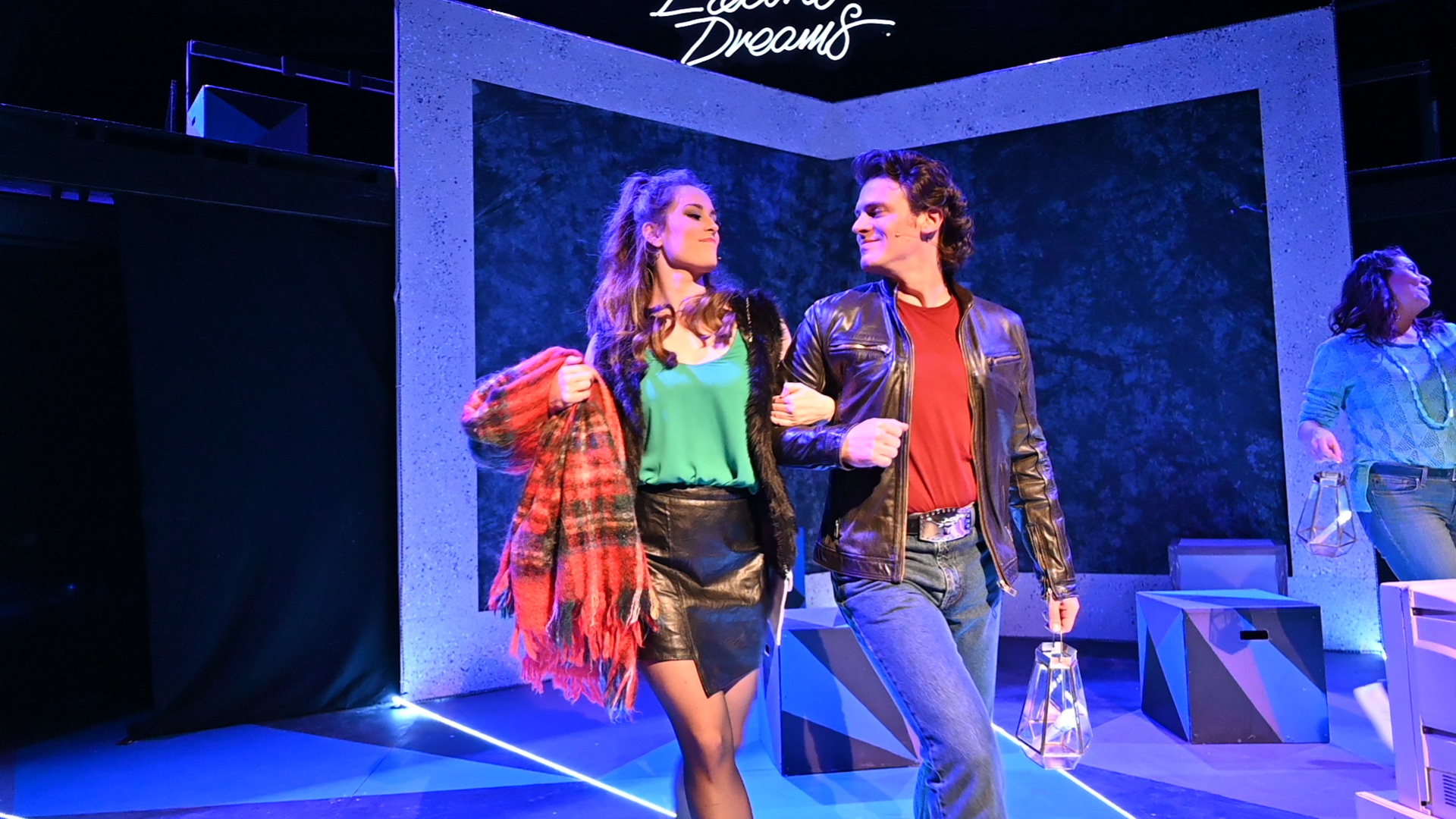 What the? Why would those associated with the production have made such a dreadful colour choice for the screen? Surely audience eye strain shouldn’t be one of their objectives. I suppose it is fortunate then that Musical Theatre Melbourne, the successor to Stella Entertainment, has labelled this a “staged workshop development production”. That gives the company plenty of latitude to change aspects of the show. The set should be top of the list, although the Electric Dreams’ signage – which glows in various hues above the action throughout the piece – is a winner.

Fortunately, notwithstanding my significant gripe, Electric Dreams: The Musical is a joyful, if rather silly, crowd pleaser, directed by Roman Berry. It is playing at Gasworks until 24th November, 2019.