The novels of British author Daphne du Maurier have provided a great source of material for filmmakers with their deft mix of intrigue, mystery, murder, mistrust and romance. Alfred Hitchcock captured the gothic atmosphere of her novel Rebecca, while he brought a sense of unease and menace to his adaptation of The Birds, a tale in which nature seemed to take vengeance on mankind. Nicolas Roeg turned her story Don’t Look Now into a perfect exercise in terror and erotic tension. These filmmakers have managed to extract suspense and an air of menace from her novels, a feat that seems to have eluded British filmmaker Roger Michell with his adaptation of her 1951 novel My Cousin Rachel, a dark tale of romance and revenge. My Cousin Rachel was originally filmed in 1952 with Olivia De Havilland and Richard Burton, in his first Hollywood film. 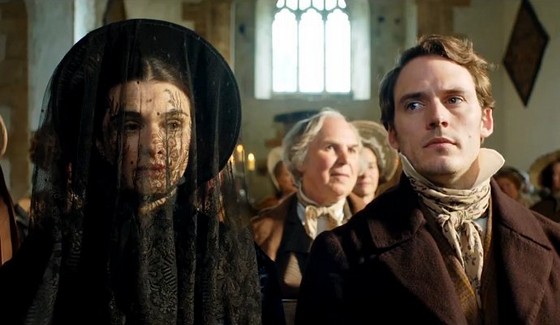 The film is set in 1830s Cornwall. Philip Ashley (Sam Claflin, recently seen in Their Finest) believes that his beloved uncle and rich benefactor Ambrose was murdered by his scheming second wife in Italy so that she can get her hands on the family fortune. Ambrose had communicated with Philip via a series of letters. But the correspondence took a darker turn when Ambrose fell ill, and suspected that Rachel was behind it. Philip plans his revenge, but when he actually meets Rachel (Rachel Weisz) when she returns to England he finds himself intrigued by her.

Rachel moves into his Cornwall estate, and despite the warnings of family friend Louise Kendall (Holliday Grainger) and his lawyer (Iain Glen from Game Of Thrones), Philip finds himself drawn in by her alluring presence. She is not quite the monster he imagined, but there is still a sense of tension in the air. Their relationship is a little uneasy as he feels that she is manipulating him into handing over the vast family fortune. When Philip falls sick and Rachel seems to grow cold and aloof, he begins to suspect that she is trying to kill him as well.

My Cousin Rachel has been set in the beautiful and picturesque location of the southwest coast of Cornwall, with some scenes also shot on location in Italy. Cinematographer Mike Eley (Touching The Void) uses natural lighting for the interior scenes, which is certainly moody and atmospheric, but also results in a few scenes that are rather dark and gloomy. While this may add to the unsettling mood and atmosphere, it renders many scenes hard to watch.

Weisz delivers an understated, enigmatic performance here, bringing subtle nuance to her portrayal of the eponymous and ambiguous Rachel. She brings an air of mystery and cunning to the contradictory character and it is hard to get a handle on her motivation. Claflin is also good as the rather naïve and trusting Philip, and this charismatic young actor continues to impress with another solid performance. Weisz and Claflin do have a good chemistry that lifts the material.

Michell is better known for his work on romantic comedies like Notting Hill, and he teases out the intrigue, but this gothic melodrama never quite engages the audience. My Cousin Rachel is a slow burning film that is also unevenly paced and a little dull. And the ambiguous nature of the ending allows audiences plenty of room for discussion and debate, and allows them to draw their own conclusions.