A story within a story, set at the height of the Second World War, Their Finest has drama, pathos, humour and subtlety.

With increasing numbers of men drafted to fight for their lives on the front line, bombs continued to drop relentlessly on London. Those left behind, made up predominantly of women, children and the elderly, were in need of something uplifting to which they could relate. As a result movies became a crucial outlet to help raise the spirits of the nation during this bleak time. The pictures provided an opportunity to reach out to the community, offering hope and optimism, but audiences demanded realism. 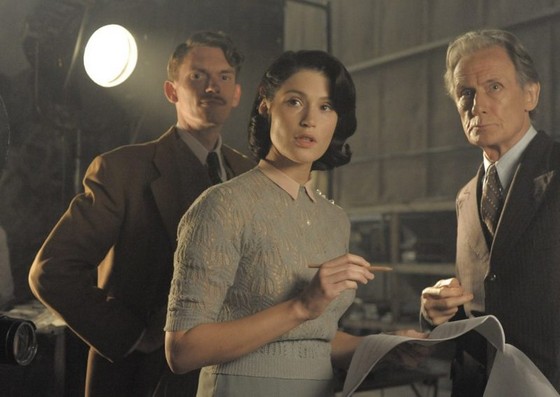 Catrin Cole (Gemma Arterton), a smart copywriter, is employed to write female dialogue – patronisingly referred to as ‘slop’ by her male co-writers – for original propaganda feature films. The intention is for these to reflect the new mood of the nation and help tap into the hearts and minds of the fast growing women’s workforce. Partnered alongside fellow screenwriter, the forthright Buckley (Sam Claflin), the screenwriters become enamoured with one particular patriotic tale. That is the story of twin sisters who set out to sea in their drunken father’s rickety old boat to rescue brave, wounded soldiers in Dunkirk. Striving to maintain a commitment to realism, Catrin is not enthused after discovering the heroic rescue is partly fabricated.

Yet with an obligation to boost morale and her own meagre finances in jeopardy, she begins writing the story the people will want to hear. While immersed in this profound, romantic tale, she begins one of own. While trying to navigate her way around a tricky situation – given Catrin has a husband at home, in war artist Ellis (Jack Huston) – she sets off to the South West Coast to begin production on the movie. Leading the film’s cast is the self-absorbed, yet charismatic thespian Ambrose Hilliard (Bill Nighy), begrudgingly settling for a supporting role and coming to terms with the fact his days of being a romantic lead could well be behind him. Pushing the disgruntled actor to accept his new career path is his recently inherited agent (Helen McCrory), the sister to his suddenly deceased lifelong friend and agent Sammy (Eddie Marsan). Hilliard is joined by heroic American pilot Carl Lundbeck (Jake Lacy), a non- professional actor in need of extensive rehearsals, hired to encourage an American audience and nation to join Britain in its fight against Nazi Germany.

First up credit must go the screenwriter Gaby Chiappe, who has adapted Lissa Evans’ novel, Their Finest Hour and a Half, into such a delightful piece, with war as the insidious backdrop. The sets, costumes and settings, so representative of the times, are a knockout. You feel like you have been transported back in time.

And then there are the performances, spearheaded by Arterton and Claflin, and aided in no small measure by Nighy, in what is very much a signature role. The distinguishing feature for me was the nuance – a look here, a sigh there. The relationship between Arterton and Claflin hardly follows a conventional path … and yet develop it does. Then there is the hoot that is the deliberate over-acting or, in some instances, lack of acting in the propaganda film they are shooting.

So, Their Finest works on many levels and sets a high bar in doing so. Just be prepared to give yourself time to let the picture and its characters win you over. Once they do, you will be in the grip of something special from director Lone Scherfig (An Education). Rated M, Their Finest scores an 8 out of 10.