You might have noticed I’m not a teenage girl. But I do have a daughter who’s right in the sweet spot for the Australian-made Back of the Net. This well-meaning film is about as predictable as it gets; but that won’t matter to its target audience. 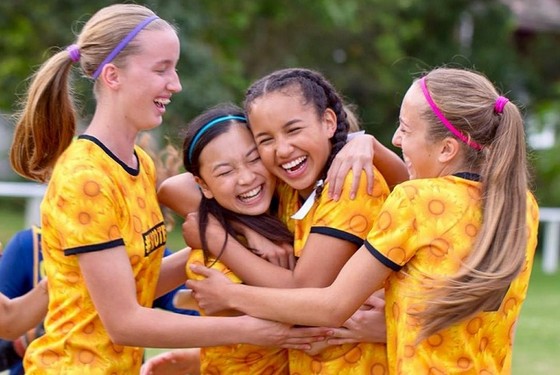 Back of the Net stars American teen actress Sofia Wylie. In case you don’t have a kid the right age, she stars in the Disney Channel’s hit show Andi Mack. So her presence is a real drawcard.

Wylie plays Cory Bailey, a science nerd whose persistence wins her a place in a “semester at sea” program run by a prestigious Australian school. But after flying into Sydney, a series of mishaps sees Cory board the bus for the school’s soccer academy, instead of the science academy. (Aside: yes, I know it’s football, not soccer, but that’s how the movie describes it). After a long bus trip, Cory discovers her mistake, but by then it’s too late – the ship has literally sailed.

With her parents on a project in a remote part of India, the school offers to have Cory continue on at the soccer school, even though she’s never even kicked a ball before. Her introduction to the sport is predictably rocky, and made all the more so by the presence of mean-girl Edie (Tiarnie Coupland). Edie’s snark seems to stem from the fact that school hunk Oliver (Trae Robin) is paying attention to Cory instead of her. But Cory finds an unlikely band of allies in her roommates: Janessa (Gemma Chua-Tran), Adelle (Yasmin Honeychurch) and Charlotte (Ashleigh Ross). They become #WOTB (of course, there has to be a hashtag) – the worst of the best. And they’re determined to take Edie and her fawning acolytes a peg or two – by using science.

Louise Alston directs from a script by Alison Spuck McNeeley and Casie Tabanou. Alston made the feature films All My Friends are Leaving Brisbane (2007) and Jucy (2010); and has been working in television since then. She imbues this film with a television vibe, which is kind of appropriate. It has the look and feel of a Disney Channel show.

Of course, no amount of flashy direction could have papered over the plot holes and clunky dialogue in the script. Nor can the inexperienced cast make too much of the material. Wylie and Coupland are the most prominent, but their efforts don’t really elevate the material. Probably the highlight (at least for me) was the appearance of Kate Box as the team’s disorganised coach. She injects some welcome humour.

But this isn’t art cinema by any means. This is entertainment for kids, pure and simple. And on that count – going by the reaction of the preview audience – it succeeds 100%.