Edith “Edie” Moon (Sheila Hancock) is an 85-year old widow. She’s spent the better part of her life caring for her domineering but wheelchair-bound husband. Now she’s preparing to move into an aged care facility. But when she visits the place to check it out, she decides she isn’t quite ready for the move. 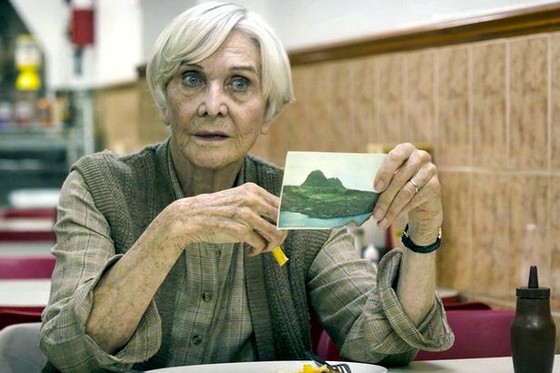 While packing up her things, she finds her diary in which she has written her thoughts about the hardships of life with her husband. She also finds a photograph of Mt Suilven, one of Scotland’s highest peaks. She had wanted to climb it with her father. Bitter at how she has wasted her life, Edie decides to return to Scotland and climb the mountain. Her family though do not like the idea because of her age and health.

She is not quite prepared for how physically demanding this challenge is though. She meets Johnny (Kevin Guthrie), a younger man who runs a mountaineering shop. Sensing her difficulties, he reluctantly agrees to help her. He becomes her guide on the arduous climb, and a friendship develops between them.

Edie is a gently paced film by writer-director Simon Hunter (though Elizabeth O’Halloran and Edward Lynden Bell collaborated on the script). This simple story is another variation on the odd couple journey, and it feels both familiar and a little cliched at times. It marks a change of pace for Hunter, whose previous film was the sci-fi action tale Mutant Chronicles.

Edie is a showcase for veteran Hancock (The Boy in the Striped Pyjamas) who has enjoyed a lengthy career on both stage and screen. At the age of 85, she’s still active, mainly on television. She is on screen for the whole film and carries it with her performance. Hancock conveys a range of emotions, from grief to defiance and resilience and even carries a hint of vulnerability and frailty. The actor underwent a fitness training regime to prepare for this physically demanding role. She develops a nice rapport and chemistry with Guthrie (Fantastic Beasts and Where to Find Them). Their odd-couple dynamic and good-natured bickering produces a few gentle chuckles.

But ultimately Edie seems a fairly formulaic tale of an octogenarian seeking to establish her independence and sense of freedom. While certainly gorgeous to look at, it is a little dull and the idea would probably have been better served as a shorter film. Edie will appeal to the same demographic who enjoyed solid British dramas like The Best Exotic Marigold Hotel.