Ánimas certainly isn’t an easy film. It also takes a while before you realize what’s actually going on. The film looks enormously artistic thanks to the quirky image setting. Scenes in different color palettes alternate. From intense red and bright orange to soothing green. I suppose it’s “a state of mind” related kind of thing. I can’t come up with another deeper meaning. Although I read a statement somewhere where the concept of traffic lights seemed a plausible explanation. The only thing that bothered me sometimes, was the constantly flickering lights. Ánimas in itself wasn’t really a horror. But that is perhaps due to the fact that the entire film is spoken in Spanish which gives me a sort of holiday feeling. The movie shows how the psyche of a tormented person functions and how a specific incident can provide a psychological defense mechanism. Hence the sometimes hallucinatory and surrealistic images. 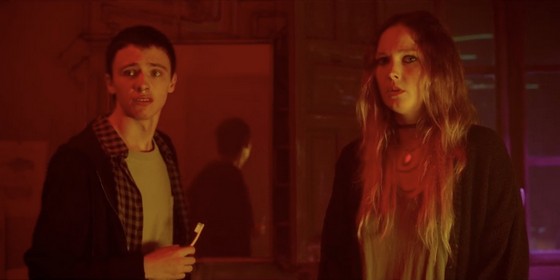 It may all sound a bit absurd and complicated. And on top of that, the film is terribly slow in the beginning as well. It starts with Bram (Ivan Pellicer) and Alex (Clare Durant) meeting on the stairs of the apartment where both children live. Bram anxiously hiding there in the stairwell while his father (Luis Bermejo) rages in their home. From the outset, it’s abundantly clear that domestic violence is involved. When Alex tells him how to deal with fear and ensures him she’ll repair his broken yo-yo, it’s the start of a close friendship. A friendship that stays close until both finish high school and they are ready for a university career. A carefree life in which only a budding romance between Bram and Anchi (Chacha Huang) causes agitation for Alex. Well, so it seems. Until we get to see fairly bizarre images. Alex hurting herself while standing in front of the mirror. And the moment Bram’s mother comes into the picture, you realize the home situation there isn’t normal either. A catatonic looking woman who is constantly staring at a clock and appears to be lifeless. The result after years of living under the yoke of a violent husband and father.

As mentioned, the film seems rather chaotic and difficult to follow at a certain moment. The bizarre storyline and sudden flashbacks don’t make it easy. And when ghostly appearances and mysterious shadows begin to play along, targeting Alex apparently, the film goes down a more sinister path. Ánimas wasn’t really horror for me but rather a psychological thriller. A film that seeks to visualize the psyche of a traumatized individual. At times it seemed as if Alex was moving in an unrealistic world created by Escher. It causes confusion. Both for Alex and the viewer. You wonder whether it’s reality or a dream world. Until the moment of the disclosure in the end (or perhaps a bit earlier when you start realizing a little bit what the plausible explanation might be) because then everything suddenly becomes clearer.

Ánimas is no ordinary, average horror or thriller. The story has been built up too cleverly for this. And even though you get shivers from the spooky and darkly dilapidated apartment building and the characters are creepy in a certain way, the film will certainly not scare you. I found the acting of the two main characters sublime. Bram, the timid teenager who hides in his own little world far from everything that could harm him. Alex, the bustling teenager whose personality is difficult to place. Only the relationship between the two protagonists remains a bit blurred at the start. And perhaps many will drop out after a while because maybe the movie is too slow, too meaningless and too confusing for them. However, it’s worth the effort to sit out the film in such a way that the entire setup becomes clearer. Perhaps it’s not a film that’ll resonate for a long time and stays with you for days. But it’s a worthy addition to the Netflix Originals range.

You can watch Ánimas on Netflix now!