Whenever I read news reports about films that make people suffer from migraine attacks and even make them sick, my curiosity is immediately awakened. The final verdict can go two ways. Either the film indeed has an ingeniously elaborated story and is provided with images the average stomach can’t bear. Or it’s the umpteenth overrated movie of which you ask yourself afterward “Who on Earth made such statements?” Are those people who’ve never seen a similar film as The Perfection? Are they film lovers who limit themselves to innocent rom-coms? Or supporters of superficial films such as The Sound of Music? No idea. In any case, I couldn’t find any nauseating fragments or rancid footage in this Netflix Original. But that doesn’t mean I thought it was a terrible movie. On the contrary, The Perfection contains a cleverly put-together story, some successful acting, and a surprising denouement. So, highly recommended. 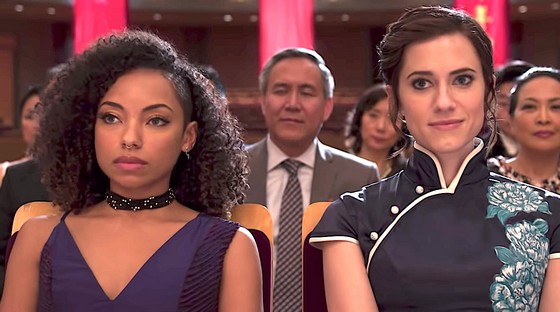 I myself thought that The Perfection was nothing more than a psychological thriller with a bit of eroticism and a few lurid events. Admittedly, the denouement will look pretty disturbing for some. But I assure you that this film will mislead you from the start. The goal that Charlotte (Allison Williams) has in mind and the reasons for this are of a very different nature than you would expect. If you realize what a dark secret the Bachoff Institute is hiding, where Charlotte has taken lessons for years as a gifted cellist, it will give you more chills than the bus ride through rural China. The film fits in perfectly with our modern zeitgeist where there’s a MeToo movement that explicitly tries to draw attention to sexual harassment and sexual assault. How the renowned academy Bachoff can be associated with this is something that you have to discover for yourself in this original film.

It’s quite clear that this film is difficult to catalog when it comes to the genre. It’s actually a mixed bag of different genres. It’s a light-erotic thriller with a dash of horror. For experienced horror enthusiasts, the horror part will be slightly disappointing. You could describe it as an ultra-light version of I Spit on Your Grave. But without explicit visual material and a wide variety of horrifying revenge actions. And from the beginning of the film till roughly halfway, it’s a mild drama where you are introduced to the most important protagonists. Charlotte, a talented cellist who, after years of absence (taking care of her sick mother), seeks contact again with her former music teacher Anton (Steven Weber) and his wife Paloma (Alaina Huffman). But especially the meeting with the new star of the academy, cellist Lizzie (Logan Browning), is causing some stir. First of all, you can feel the competition between the two cellists whose finger-fastness and sensitive handling of the fiddlestick create magical sounds the moment they squeeze a cello between their knees. As these two, not bad-looking classical musicians spend more time together, the sexual tension between them increases. And before they know it, they make use of the skills they use while playing the cello, when they are all over each other when lying naked under the sheets.

Once this introduction took place and the two lovebirds are sitting on a local bus on their way to some small town in China, the film goes in a higher gear. The frivolous atmosphere makes way for exciting situations and horror elements. It feels rather mysterious. Even the rewind moments won’t really clarify it. On the one hand, I thought this technique was kind of an original approach. On the other hand, it seemed rather pedantic. Let’s say something about acting. There’s actually nothing negative to announce. You can safely state that the two main characters almost reach perfection when it’s about that. The chemistry between the two girls is realistic. The different moods that they struggle through are convincing. Steven Weber and Alaina Huffman also fit perfectly into their role. An illustrious couple consisting of dark personalities. Perhaps it seems as if they have mixed a number of different genres and it feels as if they didn’t know which direction to go. But it never gets boring. No, The Perfection is certainly not perfect. But it wasn’t very far from perfection.

You can watch The Perfection on Netflix now.