I’ve loathed every film revered auteur Terrence Malick has made since The Tree of Life. His impressionistic take on the material – with its ethereal visuals, non-linear structure, the fragments of whispered, overlapping dialogue, the rapid cutting within scenes that barely give a moment room to breathe and the off-centre framing of his characters and an obsession with the natural world around us and spirituality – have made To the Wonder, Knight of Cups and Song to Song almost unwatchable. All of his signature stylistic touches and idiosyncratic flourishes are present and accounted for in his latest work, but this time around he is telling a more compelling story. 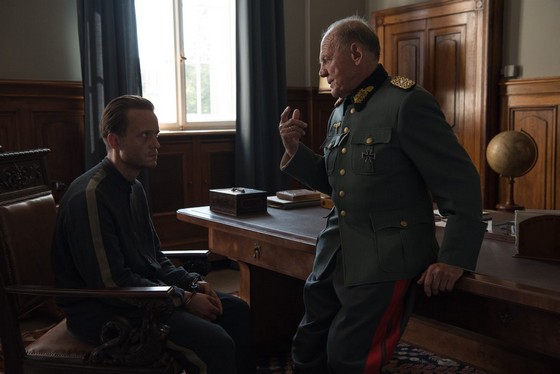 The film is set in Austria between 1939 and 1943, and follows Franz Jagerstatter (played by August Diehl, from Inglorious Basterds) a peasant farmer who lives with his wife Fani (Valerie Pachner) and their three daughters in the tightly knit, idyllic village of Saint Radegund in the Alps. After Hitler annexes Austria and makes it a part of the Fatherland, Franz initially refuses to support the war effort and finds himself and his family ostracised. Along with a number of other able-bodied Austrian men, Franz is called up for basic training. One of the requirements of new soldiers is to swear allegiance to Hitler and the Third Reich. A conscientious objector, Franz refuses to do so and pays a high price for his defiance. He is imprisoned, beaten by the Nazis and eventually executed.

A Hidden Life, which takes its title from the last lines of George Elliot’s novel Middlemarch, explores the dynamic between religion and faith and looks at the cost of resisting tyranny and standing up for your principles no matter what the cost. Malick has drawn upon the letters exchanged between Franz and his wife for inspiration for much of the film.

The film looks gorgeous thanks largely to the elegiac, lyrical widescreen lensing of cinematographer Joerg Widmer (a camera operator on seven of Malick’s previous films), which captures some beautiful, poetic imagery. Some of the early pastoral scenes will remind many in the audience of Malick’s Days of Heaven. However, this is a slow-moving drama and the 173-minute running time is a little too indulgent. The film would have benefitted from having at least 30-minutes trimmed from its length. And if Malick had employed a more conventional, straight forward narrative approach the impact would have been much stronger.

Malick has assembled a solid supporting cast that includes the late Bruno Ganz as a Nazi judge, the late Michael Nyqvist (The Girl With The Dragon Tattoo), and Matthias Schoenaerts in small role.

Malick’s films have been an acquired taste of late. And while A Hidden Life is Malick’s most ambitious film for quite some time and deals with some important themes and tells a worthy story, his signature touches mute the impact of the drama and make it a little inaccessible for general audiences. Apparently Malick spent nearly three years shaping the film in the editing suite. His pretentious directorial style keeps us at arm’s length from fully identifying with Franz and empathising with his plight. Given the nature of the story and Franz’ sacrifice, this film should have a much more powerful gut punch, but is unfortunately muted by Malick’s impressionistic approach.