Brian Kirk’s 21 Bridges is a predictable procedural broken into two parts – one involving a big haul of drugs and cop killers, and the other corrupt police. The script by Adam Mervis and Matthew Michael Carnahan (World War Z) is nothing we haven’t seen many times before. The only interest is how it reaches its inevitable conclusion and in that regard there is a bit of pulse-racing action as the body count mounts. 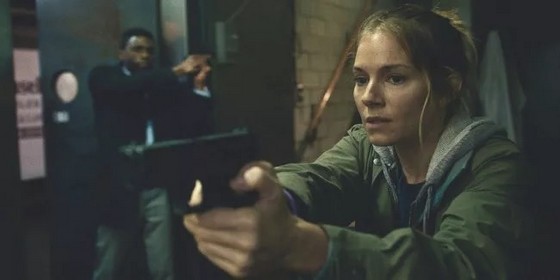 Chadwick Boseman is NYPD detective Andre Davis. He’s the son of a highly decorated cop who died on the job when Andre was only 13. Now aged 32, Detective Davis is good at his job, but he’s regarded as trigger happy, with no less than eight kills in nine years. He’s called in as the lead detective when eight police are killed in the line of duty by a couple of thieves in a cocaine heist gone wrong.

The hoods, Ray (Taylor Kitsch) and Michael (Stephen James), are friends who get in way over their heads as the force arrives before they are able to make their getaway. Once cop killers are on the loose, the police were never going to take the situation lightly. To that end, Detective Davis is begrudgingly partnered with narcotics detective Frankie Burns (Sienna Miller). Davis orders the closure of all 21 bridges in and out of Manhattan, together with three rivers, four tunnels and every train. The idea is to stop the desperate murderers from escaping from the city.

The action unfolds over a single night and early morning. Hunting down the armed offenders is only one part of the equation.

The acting in 21 Bridges is pretty much by-the-book, with none of the main players – who also include J.K. Simmons as Captain McKenna – stretched. The lead, Boseman (Black Panther), is your classic by the book cop, over whom a cloud sits because he has literally taken down so many perps. Sure, the filmmakers have brought together a few big guns to aid their cause, but the characterisations don’t exactly allow for nuance.

There’s no shortage of gunfire, along with blood and death, and car and foot chases. Unfortunately, I can’t say any of it surprised me. 21 Bridges has high production values and should satisfy adrenaline-seeking younger males in particular.