Could Stan’s new series Zoey’s Extraordinary Playlist mark the birth of a new sub-genre – the comedy-soap-musical? It certainly gets props for trying something new. But having gone out on a limb with the concept, the producers quickly scamper back to safety as the series falls into some very tired tropes.

Austin Winsberg – who was a producer on Gossip Girl – serves as the show’s creator. Perhaps tapping into some of that Gossip Girl vibe, the show uses around a high conceit to explore more prosaic concerns. Those concerns however soon drift into soap opera, resulting in their treatment being superficial and often just plain bland. 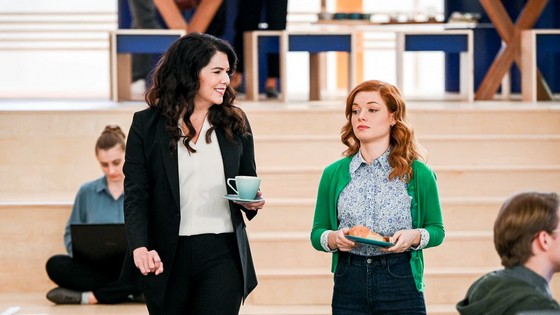 Zoey (Jane Levy) works at a tech firm in San Francisco. While she’s on the uptick career-wise, she’s dealing with some stuff in her personal life. For a start, she has an uneasy relationship with her neighbour Mo (Alex Newell), who likes to belt out show tunes at inappropriate times. She’s also crushing hard on co-worker Simon (John Clarence Stewart); while her colleague and bestie Max (Skylar Askin) in turn has a secret crush on her. But most significantly her father Mitch (Peter Gallagher) has fallen ill with a debilitating disease; thrusting Zoey’s mother Maggie (Mary Steenburgen) into the role of caregiver. Worried she might be at risk of the same degenerative condition, Zoey takes an MRI to see if there’s a link. But just as she plugs in her headset and the MRI begins, one of San Fran’s notorious earthquakes hits, sending the MRI lab into chaos. While she gets out seemingly unscathed, Zoey begins to notice some strange occurrences. Specifically, people around seemingly her burst into song – but only she can see them. Also, they seem to be revealing their deepest thoughts through these musical interludes. Understandably freaked out, she turns to Mo for help.

Winsburg builds the show around the musical numbers, which tend to be well-known pop and rock songs (the licensing deal must have been a nightmare). The actors all sing in their own voices, though the filmed sequences (which often include elaborate dance moves) are clearly lip-synched. If it weren’t for these (usually) energetic scenes, Zoey’s Extraordinary Playlist would be a run-of-the-mill soap with little to recommend it.

The show tries to delve into issues like disability, grief and identity; but its efforts are pretty uninspiring. The blend of comedy and soapy drama never really gels, leaving the show in a kind of weird limbo between the two. But it does succeed when it sticks to following Zoey’s personal relationships; notably her romances and workplace dynamics.

Jane Levy (What/If) gives the show its pivot point as Zoey. Her character’s relationships with basically every other character in the show drive the narrative along. Levy has recently appeared in some horror movies, but she seems much better suited to comedic roles like this one. Alex Newell got his breakthrough on Glee, and his role as Mo isn’t a million miles away from that; but he handles the part with panache. Poor Peter Gallagher (Law & Order: SVU) gets the short straw as the helpless Mitch; while Mary Steenburgen (Orange is the New Black) plays the middle-class suburban mom to a tee as Maggie. Skylar Astin is a little milquetoast for my liking as Max; though he’s offset to some extent by John Clarence Stewart, who at least brings an edge to Simon despite some poor treatment by the script.

Zoey’s Extraordinary Playlist is an odd experience. The mish-mash of genres and styles is a bit strange, and the overlay of the musical set-pieces made it even stranger for me. I found the soapy elements a bit too over-the-top, but I guess that’s the nature of soap. Still, if you’re a fan of shows like This is Us, you’ll find plenty to like here. And if you’re just there for the song-and-dance, it’ll probably suit you perfectly.