You Got Older is an American play, from a young up-and-coming playwright, Clare Barron. It premiered in 2014 and won the Obie Award in 2015.

You Got Older concerns cancer and dying. It seems the writer, Ms Barron, lost her job, had a break-up and received the news that her father had a bad cancer diagnosis. Her world seemed to be collapsing. Writing became a solace. She went home to care for her dad. This play emerged. It is, then, an autobiographical work – except, in the real instance, dad survived. 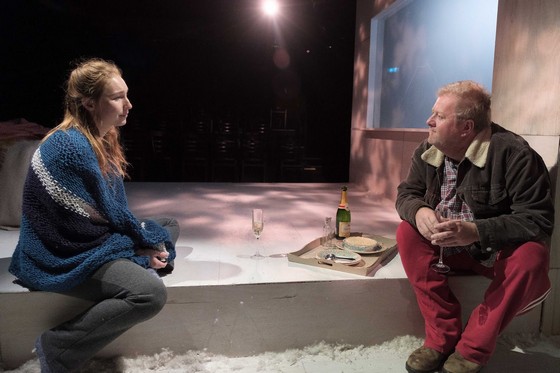 In the play, Mae, a lawyer (Harriet Gordon-Anderson), has lost her job, has had a break-up and has gone home to care for her father (Steve Rogers), who is in treatment for an invasive cancer. In her small mid-western city in a snowy winter, her siblings and their family (Alex Beauman, Alison McGlynn, Sarah Meecham) gather around to support dad, she re-acquaints herself with a school friend, Mac (Cody Ross), and has sado-masochistic sexual fantasies with a hatted cowboy (Gareth Rickards).

The sexual fantasy of dreams manifested, perhaps, from stress, the relentless desire for real sex – the life force – in a house in the shadow of the grim reaper, Death (Chekhov irony?) – it’s been 41 days since Mae last had it!, she tells us – comforting but dulling banality of conversation and behaviour from family and friend are mixed with the quasi ponder over the profundity of the brittle knowledge of the inevitability of human mortality. These are the ingredients of this many-scened play.

The play has us facing, as witness, the stoicism of a family in the midst of an inevitable reality – death – of a painful one under sedation. It is acutely observed and has a surprising sense of humour bubbling through the gloomy circumstances and climaxes with a release orgasmic dance ‘party’ resolution – life will – does – go on, for some, I guess, until they get older.

For me, the mechanisms of the writing are too obvious – and one simply waited for the emotional break and its aftermath to come with a tired predictive patience – it came – some of us were moved – some of us not. The writerly manipulation to painful sentiment was too transparent for me to get willingly on board. Was I told anything I didn’t already know before the play finished? Was I changed by what did happen? Was it worth the whole 2 hours in the theatre? Well, for me, no.

Director Claudia Barrie has elicited very good performances from all of the company of a very naturalistic kind. Mr Rogers as the dying dad, especially, gives a portrait of an ordinary bloke facing his inevitable fate with admirable stoicism, with gentle restraint, even in his tearful ‘crack-up’, while Ms Gordon-Harriet pushes her character’s brittleness just a little too obviously – the strain of Mae’s condition is an ‘acted’ strain – Ms Gordon-Harriet does not seem to touch too deeply within herself to have us believe what is really going on – it is indicated artfully but not truthfully experienced. (It’s telling to remember the recent work of Elijah Willliams in The Rolling Stone as a reference to the quality of depth I was looking for, that may have released my cynicism about the work into a ‘co-operative’ emotional belief).

Isabel Hudson, with an ever consistent artistic contribution, creates a believable space with economy and enhancing aesthetics on this difficult traverse stage, and with Emily Brayshaw, who has designed the costumes, a world that is redolent with imaginative verisimilitude. Lighting is by Ben Brockman; and the sound design and composition by Ben Pierpoint resonates with time location and emotional direction without overstatement.

This is of the well made, but fairly ordinary, American play genre, which is well produced by Mad March Hare Theatre, with the usual delight in the grotesqueries of the body, that Ms Barrie in her choice of plays to direct, has a curious predilection for.

P.S. There are, in what is almost a Sydney tradition, NO program notes telling us about the writer. Everybody but the writer Clare Barron, the originator, the source of the artistic effort. Again, just saying! The writer made anonymous, invisible.