Israeli actress Gal Gadot imposes herself on screen in a rare outing for Hollywood – a big budget superhero movie featuring a female in the lead role. It is hard to believe it has taken this long for Wonder Woman to make it to the big screen in her own right. In comic book form she has been around for more than 75 years.

Before she was Wonder Woman, she was Diana, princess of the Amazons. She was raised on a sheltered island paradise and trained to be an unconquerable warrior. Newcomer Lilly Aspell plays the eight-year-old Diana, while Emily Carey assumes her persona at age 12, before Gadot takes over the role. 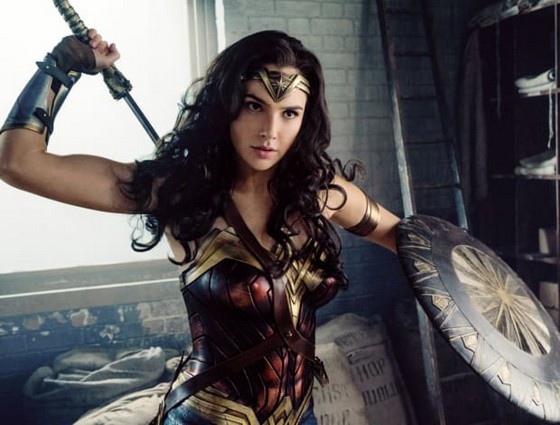 When an American pilot, Steve Trevor (Chris Pine – Star Trek) crashes on their shores and tells of a massive conflict raging in the outside world (the First World War), Diana leaves her home, convinced she can stop the threat. Fighting alongside man in a war to end all wars, Diana will discover her full powers … and her true destiny. Others of note in the cast include Connie Nielsen as Diana’s mother, the Queen Hippolyta, who tries to guard her daughter from learning the truth about what she will potentially face. She doesn’t want Diana to fight. She knows what it really means to go to war and that is not what she desires for her daughter. But Diana won’t be restrained and prevails upon her aunt, General Antiope (Robin Wright), the greatest Amazon warrior of them all, to train her.

Gadot was introduced to us as Wonder Woman in Batman v Superman: Dawn of Justice. In November this year, she will star again in the role in Justice League.

Though creator William Moulton Marston first introduced Wonder Woman to readers in the midst of World War II, the film is set in 1918, at the tail end of the First World War. Producer Charles Roven explains the filmmakers’ thinking behind the time shift. “Juxtaposing this commanding female character who hails from a race of equally strong independent women with the early days of the suffragette movement was really interesting. From a visual perspective, the subtleties of the era better convey the true horrors of modern war.”

All-female combat training scenes at the start of the film are well choreographed and leave a favourable impression. Gadot displays a perfect combination of naïveté, good humour, smouldering sex appeal and kiss-ass action heroine. Pine is her well cast foil – a gentleman with a few tickets on himself. They are a good combination and some of the lines they have been fed are a hoot.

The complexities of the back-story are a little difficult to get your head around. Wonder Woman’s transition from relative safety to all-out war, less so. Her interactions with Pine’s people in Britain are among the high points of the film. These are mainly when it’s not taking itself seriously.

I thoroughly enjoyed the first four-fifths, but once evil incarnate showed his head I am afraid I was done. All credibility – whatever little there may have been – went out the window. I just found what was dished up from that point on stupendously silly. Pity, because overall I would still give Wonder Woman a big thumbs up. Rated MA, it scores a 7½ out of 10.