Wonder Woman (2017) was one of the best films in the expanded DC cinematic universe. The sequel, Wonder Woman 1984 (or WW84 if you prefer), is one of the first blockbusters to welcome cinema audiences back the pandemic-related lockdowns. So there’s a lot riding on it to be a success. Unfortunately, as is the case with so many sequels, it’s not as strong as the original.

A prologue takes us back to Diana’s childhood on her home island of Themyscira, where a young Diana (Lilly Aspell) learns an important lesson during a competition. It is a lesson that will play an important part in later events. 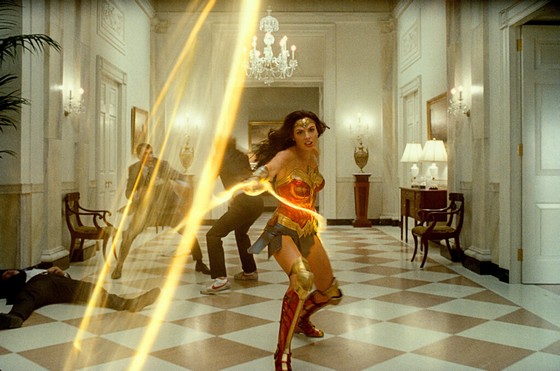 The film itself is set more than 60 years after the events of the first film, most of which took place against the epic backdrop of World War I. Now we meet Diana Prince (once again played by Gal Gadot) who is still lonely and grieving the loss of her beloved Steve Trevor (Chris Pine). She buries herself in her work with the Smithsonian Institution in Washington DC. The FBI wants the Smithsonian to look into a strange ancient crystal, known as the Dreamstone, which has the power to grant people any wish. Diana’s colleague Barbara Minerva (Kristen Wiig), a socially awkward and clumsy gemologist, is analysing it. Her wish is to be more like Diana, confident and beautiful; but it also comes with a surprise as she develops powers of her own. And when Diana unconsciously makes a wish about her lost love, Steve mysteriously reappears in her life.

The crystal is also desired by Maxwell Lord (Chilean actor Pedro Pascal), a flamboyant television star and conman desperately trying to avoid bankruptcy and the loss of financial backers in his pursuit of oil. He’s a busy man who is divorced from his wife. He wants to try and spend more quality time with his estranged young son but finds that the demands of work keep getting in the way of his relationship. He steals the crystal and then absorbs its power. He becomes all powerful, granting all sorts of wishes and gaining more power as a result. He leads the world into chaos and eventually to the brink of an apocalypse. The only one who can stop him is Diana (aka Wonder Woman), but her now-granted wish to bring Steve back into her life is slowly draining her powers.

This is all a little bit silly (what can you expect from a film based on a comic book?) but at 151 minutes, the film seems a little too long for what it has to say. And there are some pacing issues. Also having two main villains confront the hero has been a problem in several of these superhero adaptations.

Returning director Patty Jenkins flexes her muscle with a couple of superb kinetically staged action sequences including as holdup in a crowded shopping mall, a fight in the White House, and an attack on a convoy in Egypt. But as usual the climactic showdown seems a little bloated. There are some lame attempts at humour, especially as a bewildered Steve tries to adapt to the strange new settings of Washington in the mid-’80s. The romance between Steve and Diana though adds a more intimate quality to the material.

The film has been written by Jenkins, Geoff Johns (who’s well versed in this world, having worked on DC TV series like The Flash and Green Lantern) and Dave Callaham (The Expendables), who throw a lot of ideas into the mix. This is an ambitious film. WW84 is a story of female empowerment, that also deals with themes of love and loss, abuse of power. And it pointedly warns to be careful of what you wish for, as some wishes come with unexpected consequences. And you can also read into the subtext a critique of the Reagan era as well as an obvious rebuke to Donald Trump and Trumpism, which gives the material a contemporary resonance.

Most of the films in the DC cinematic universe have been rather dark and bleak affairs, but WW84 is a lot brighter and more colourful, thanks to some great widescreen lensing from cinematographer Matthew Jensen (Wonder Woman). The special effects are quite impressive. There is also some impressive production design from Aline Bonetto, and costume designer Lindy Hemming brings us some fabulous 80s fashions. But there is no real sense of nostalgia for the period. Hans Zimmer’s score is typically bombastic.

Gadot is watchable and has a wonderful physical presence but seems a little bored and less engaged here. Pascal (Kingsman: The Golden Circle) hams it up wonderfully as Lord, one of the main villains in the Wonder Woman comics, even though he’s not the most overtly evil comic book villain we’ve seen on screen. Pine (A Wrinkle in Time) provides much of the comedy here with a self-effacing turn as the hapless Steve. Wiig (Where’d You Go, Bernadette) plays against type here and proves herself quite a strong dramatic actress. And during the end credits there’s a nice cameo appearance.

The film contains many of the familiar touchstones of Wonder Woman’s mythology, including the use of her bracelets, her tiara and her magic lasso in defeating villains, which will please fans of the comic and the cheesy 70s TV series.

Greg King
For more of Greg King’s writing on film, check out his blog at filmreviews.net.au