Melodrama is amped up in Wonder Wheel, a period piece set in the hustle and bustle of Coney Island amusement park. Woody Allen has always had a special fondness for Coney Island. He set the childhood home of Annie Hall’s Alvy Singer under the clattering Cyclone roller coaster. 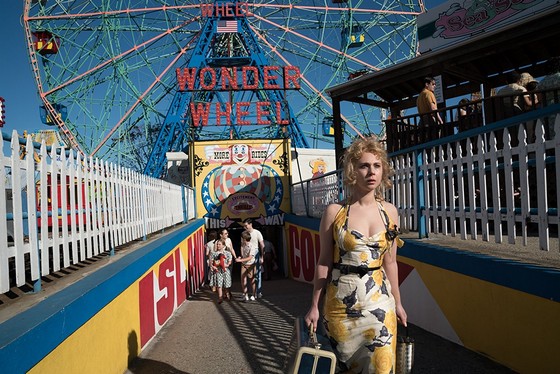 Set in the 1950s, like so many of Allen’s films, Wonder Wheel is a story that involves love and betrayal. Ginny (Kate Winslet) is an emotionally volatile former actress, now working as a waitress in a clam house. Reeling after an emotional breakdown brought on by her divorce, Ginny finds solace by marrying fellow lost soul Humpty (Jim Belushi), who is grieving after the death of his wife.

He was also cut up by the departure of Carolina (Juno Temple), who ran away to marry a local hoodlum some years earlier. Penniless and fearing for her life, Carolina has no-where else to turn other than Humpty when she leaves her husband and rats him out to the FBI. She’s now hiding out from gangsters at her father’s apartment.

While Humpty has problems with alcohol and holding onto a job, he provides Ginny and her troubled son Richie (Jack Gore) – a pyromaniac – with a home. Although Ginny finds a degree of stability with Humpty, she despairs at giving up her dreams for a waitressing job. She now finds herself married to a man more interested in fishing than the finer things, and seems unable to help her son.

Mickey (Justin Timberlake) is a dreamer – a handsome young lifeguard who dreams of becoming a playwright. He also serves as the narrator.

I love the way Woody Allen weaves together plot lines. Wonder Wheel becomes messier and messier (in a good way), the longer it progresses. I was drawn into the web of intrigue; notwithstanding frequent bouts of deliberate but off-putting over-acting. The sparing use of a narrator – an Allen trait – works well to ensure the story moves along.

Kate Winslet has moments where she shines in a complex, richly observed role. But the actor who arguably most impresses is Juno Temple.

The $64,000 question is how to finish a film like this? You can mount a reasonable argument to say that Allen takes the easy way out here. By the time we reach the end, we’re invested in the characters and want the filmmaker to decide what becomes of them. Unfortunately, it doesn’t really happen. You have to draw your own conclusions. I felt that was something of a cop-out.

While not among Allen’s finest works, Wonder Wheel is nothing if not adventurous and alluring, and boasts several engaging scenes.