The excitement I felt while watching One Flew Over The Cuckoo’s Nest (1975) – a pivotal movie in my formative years – came flooding back while watching Unsane. 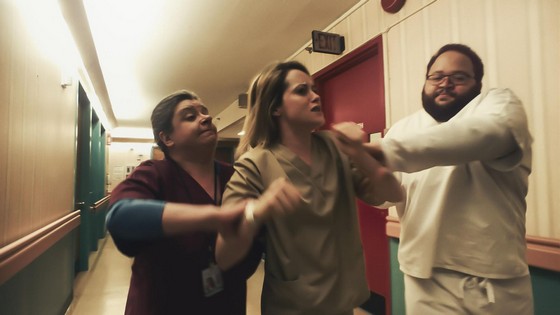 A smart young woman seeks help after a stalker has made her life miserable for two years. But she’s inadvertently admitted to a private psychiatric hospital. The consequences are hellish. Unable to leave, Sawyer Valentini (Claire Foy) finds herself in close quarters with troubled “inmate” Violet (Juno Temple) and savvy Nate (Jay Pharoah), who is battling an opioid addiction. But Sawyer becomes truly terrified when she catches sight of facility staffer George Shaw (Joshua Leonard). She believes Shaw’s real name is David Strine – and he’s her stalker. But is it real or is it a delusion? None of the doctors and nurses believe she’s in danger, and all question her sanity.

Steven Soderbergh makes compelling movies and this one is no exception. Unsane is disturbing and involving. I referred to One Flew Over The Cuckoo’s Nest, but it also reminded me of Girl, Interrupted (1999).

Claire Foy (Breathe) brings intensity and feeling to the lead role. She plays her character as a straight shooter; someone whose abruptness doesn’t always endear her to others.

As with many of the best films, there are twists you won’t see coming. The moody atmospherics in the “nut house” add to the forlorn imagery of the patients (80 percent of the movie was shot in a disused hospital). I was drawn in and held tightly throughout … and the final scene is a beauty.