The Wizard of Oz is a classic Hollywood film of 1939, based on a book by L. Frank Baum. Everybody must have seen it. I saw it at the cinema (in Bondi Junction) as a child and never got over the Flying Monkeys – they terrified me – and the ‘creepy’ munchkins. Of course, then I saw it again, over and over again on television. The Wizard of Oz is part of my storytelling heritage – not necessarily, by the way, my favourite. The song, “Somewhere, Over the Rainbow”, is almost a theme song for some of our lives.

At the Capitol Theatre we now can see a stage version using the original film songs (music by Harold Arlen, lyrics by E.Y. Harburg), with contemporary additional lyrics and music by Tim Rice and Andrew Lloyd Webber. The smart adaptation is by Andrew Lloyd Webber and Jeremy Sams – he is also the director. 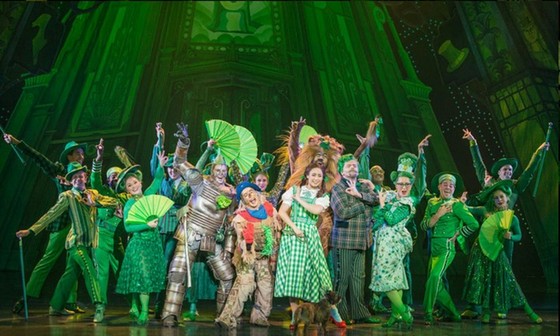 This bright and faithful adaptation is an ideal theatre experience for all the family. It creates a magic, combining the best qualities of live musical theatre with the modern ‘gadgetry’. Musical theatre provides song and dance inside a bright production design (scenic and costume design by Robert Jones). The ‘gadgetry’ of video designer Jon Driscoll is absolutely spectacular in capturing the ‘Twister’ that whisks us from the Depression period of Kansas into the colourful fantasy world of Oz, where the classic storytelling ‘hero quest’ is put to the test. (There’re other video/film pleasures as well.)

Dorothy (Samantha Dodemaide), accompanied by Scarecrow (Eli Cooper), Tin Man (Alex Rathgeber) and Lion (John Xintavelonis) have quest adventures. Along the way they’re thwarted by the Wicked Witch of the West (Jemma Rix), but supported by the Good Witch, Glinda (Lucy Durack). Everything is of course instigated by the Wizard of Oz (Anthony Warlow.)

Everybody involved in this show, especially the cast in this production, have a Mount Everest challenge of embedded cultural memory to overcome, to claim this story from the film.

Samantha Dodemaide, as Dorothy, has an especially hard act to follow (Judy Garland in the original film) but has the focus and charm and acting and singing gifts to make it her own. And, despite the commercial billing of this production where she is fourth in status, she IS the star of the show (well, along with the two dogs: Trouble and Flick who cover Toto for the show, under the tutelage of animal trainer, Luke Hura.) Her curtain call at least acknowledges her position in this production, as it should be – leading actor! Ms Dodemaide’s quality was signalled in the Hayes production of the musical Violet a few years ago.

The three men, Mr Cooper, Mr Xintavelonis and, especially, Mr Rathberger are terrific in their famous (double) roles, and Anthony Warlow creates a Wizard and Professor Marvel of folksy whimsy characteristics that are endearing. (There are a few over-statements of the possible sexuality of one of the characters – “We are friends of Dorothy” etc, in the writing/adaptation.)

While Lucy Durack, as Glinda, looks glamorous she seems to be giving an impression borrowed from Megan Mulally as ‘camp’ Karen Walker in the television show Will and Grace. Personally, and nostalgically, I wished she had tried to shadow Billie Burke more! if she had to mould her performance off popular cultural performance iconography – if that is what she is doing. Megan is no substitute for Billie and ‘hard-nosed’ Karen is no substitute for ‘daffy’ Glinda.

Jemma Rix has all the production make-up and costume support, along with the best text, to create a presence as The Wicked Witch of the West and Miss Gulch, but has not anything more than superficial mouthing and pantomime acting to bring the characters to life or to make them her own – no ownership/identification going on here – rather, it seemed simply letting the make-up and costume do the work. It’s not enough, and the remembered dynamics of the indelible work of Margaret Hamilton from the film haunt this extremely disappointing performance.

The ensemble are drilled and supportive agents of the action if not absolutely enchanting as characters in their many guises – not much individualisation or inner life! 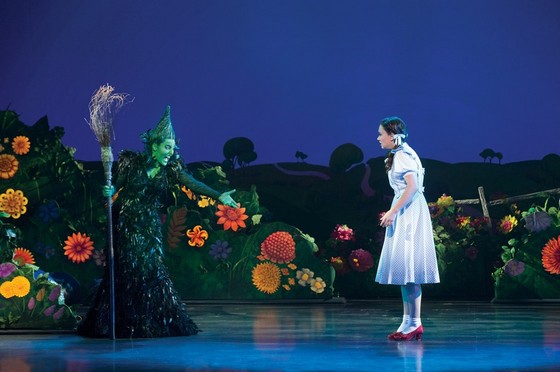 The old songs are memorable and the new additions are seamless and add musical theatre depth to the show, if not, as well, memorable tunes. (Having the Rice/Webber names on the Billboard and knowing that Evita is coming up later in the year, the quality difference of the Rice and Webber musical creations were discernible and, unfortunately, noted.) The live musical aspect of the production, on the night, led by Laura Tipoki is assured, even if the sound design, on this opening night seemed a little askew, especially as we began!

The Wizard of Oz is a stage production that will live in the DNA of the children in the audience. They will have the theatre disease for life, I hope and reckon (as an adult, I found the show awesome). A great indoctrination of audience!

It is a terrific and charming experience for the summer holidays. Recommended.