Racism and lust are on the menu in the Malthouse Theatre’s production of Underground Railroad Game. The Underground Railroad was a network of secret routes and safe houses established in the United States during the early 19th Century. African-Americans used it to escape slavery in the South by travelling to free states and what’s now Canada with the aid of abolitionists and their allies. The term is also applied to those who aided the fugitives. One estimate suggests that by 1850, 100,000 slaves had escaped via the “Railroad”. 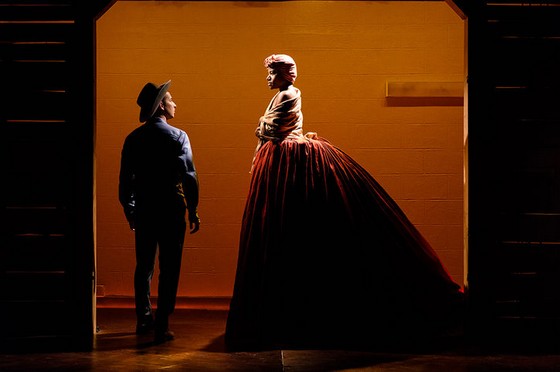 In the case of the play, the jumping-off point is a game played by students in Hanover, a small town in Pennsylvania. Re-enactment culture is significant there because it’s near Gettysburg, site of the bloodiest battle of the American Civil War. In the Underground Railroad game, dolls stand in for the fleeing slaves. Teachers split the class into two groups – from the Union and Confederate sides. Unionists earn points when their dolls reach a safe house, while Confederates are out to block safe passage.

The creators and performers of Underground Railroad Game – Jennifer Kidwell and Scott R. Sheppard – begin by playing the roles of an escaped slave hiding out in a barn and a Quaker trying to provide her with safe passage. Suddenly, the lights in the theatre are turned up and the audience members are given the role of fifth-graders – some Unionists and others Confederates. Who is on which side is determined by looking under your seat.

Kidwell and Sheppard are now teachers on either side of the political divide, but it quickly becomes clear that they are also “into” each other because they have a physical connection. The “game” continues, with some pivotal dramatic moments reached. Before this is over the teachers will be affronted, angered and aroused.

Nudity and simulated sex acts are part of the repertoire. Make of it what you will. The shocks, laughter and histrionics keep coming. As directed Taibi Magar, this is definitely theatre that pushes the boundaries in making  points about right and wrong. While it won’t be everyone’s cup of tea, the full house I saw it with appeared to ride every bump, judging by their effusive reactions. 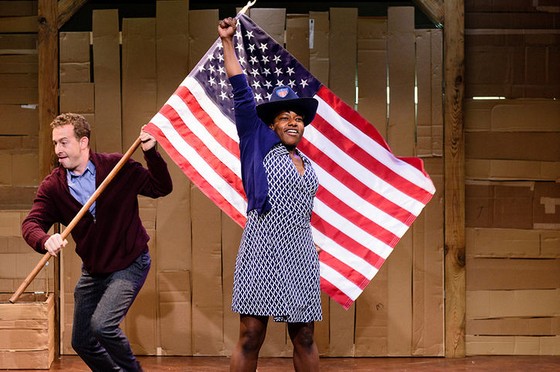 I should add that the creators extend to a Philadelphia-based theatre company called Lightning Rod Special, which fashions live performances from the ground up.