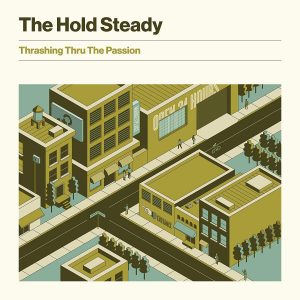 Very few fans of The Hold Steady have any doubts about the story writing ability of singer/songwriter Craig Finn, but if anyone did by the release of the band’s sixth and last release, 2014’s Teeth Dreams, we now have three more solo albums by Finn that speak to his skill set. With the most recent of those albums released just back in May, I Need a New War, we recognize Finn’s tendency to people his songs with people struggling to figure out how to make it through life in one piece. And, given that he’s writing without the other members of The Hold Steady, we not only see Finn’s strengths, but can begin to suss out clearly the musical gifts and talents of the other players in the band. For instance, in the solo setting, Finn’s vocals and melodies get more room to breathe, and the pacing is more singer/songwriter friendly, whereas in The Hold Steady we often find the songs set to a more rapid fire pace, and get a more guitar driven rock sound throughout, as guitarists Tad Kubler and Steve Selvidge play a role in writing and arranging the tracks.

Thrashing Thru the Passion arrives with 5 new songs, all recorded at the beginning of this year, which make up the first half of the album, or if you’re doing vinyl, side one. The remaining 5 tracks have been previously released as digital downloads, often tied to a series of live shows and with the proceeds going to charities. Combined here, the 10 tracks work together as a strong collection of just what you’d expect from The Hold Steady, playing at their musical peak. While I have totally enjoyed Finn’s solo albums, especially for the storytelling, listening to the band together on this recording you get a real appreciation for all those great guitar hooks, punchy rhythms and the musical intensity of the soloing. It’s like, oh yeah, I was missing the rock & roll.

“Denver Haircut” and “Epaulets” open the record, coming out of the gate rocking, where Kubler and Selvidge bring plenty of rhythmic crunch to intros and transitions, but there’s plenty of room as well for the rhythm section of Galen Palivka on bass and drummer Bobby Drake to make their presence known, as well as Franz Nicolay on rock & roll piano and a variety of accessory keyboards. “You Did Good Kid” mixes things up a little, with a choral shout out of the title over a kicking drum beat, and the echoing bells of Nicolay’s keys. The song’s lyrics provide the album’s title, while Finn’s speak/sing vocal is supported by a nice horn track, not unlike on a few of the tracks on “I Need a New War.” “Blackout Sam,” the one song slowed down enough that it might have fit on Finn’s solo projects, sung mostly over the piano, but the tasty double guitar solo toward the end mark it as a Hold Steady product.

Of the five previously available digital tracks, “Entitlement Crew” and “T-Shirt Tux” fare the best, the latter a standard Hold Steady party deconstruction anthem with some fun stereo guitar play. “Star 18” feel a tad too familiar, but is saved by a winning Farfisa organ sound, an hilarious lyric about a guy “who said he used to play with Peter Tosh/but he never brought it up again once I said ‘man, I don’t believe you,’” and Kubler’s aggressive guitar soloing. Truth be told, I’m pretty much a sucker for this band’s rockers even at their most predictable, like the way the horns on “The Stove & The Toaster” seem to echo Bruce Springsteen, because they are such a solid band when hitting on all 6 cylinders, as they are here on Thrashing Thru The Passion, as aptly titled an album as I’ve heard lately.