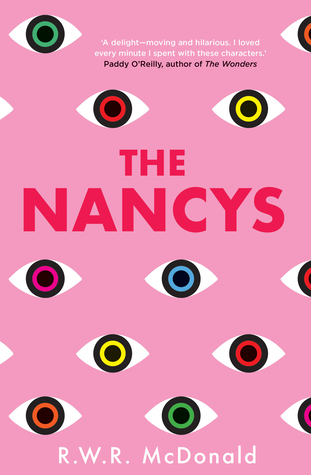 Hands up those who thought we’d grow up to be Nancy Drew, although I will confess I was more in the Trixie Belden camp. But those books, The Secret Seven, The Famous Five and the Three Investigators series probably had a lot to do with anybody around our age addicted to mysteries, thrillers and crime fiction. Although I doubt anybody quite expected the homage that is The Nancys by Kiwi-Australian writer R.W.R. McDonald. And potential readers should be warned – this is not a book you’d be giving to your average 8 year old. Unless you’re of a particularly broad mind and even then you may find yourself in some complicated explanation situations.

The Nancys, in short, is the story of when 11 year old Tippy Chan, Uncle Pike and his new boyfriend Devon solve a murder in the small New Zealand town in which Tippy and her mother Helen (Pike’s sister) live. It’s the same town where Pike grew up, the town he left as a young man, thinking his sexuality wasn’t small town living compatible. It’s the town where Helen married and lived with Tippy’s father until his recent death, and now, after Helen has headed off on a much needed vacation, Tippy, Pike and Devon (henceforth known as the Nancys) investigate the violent murder of Tippy’s teacher, and the accident that put one of her best friends in hospital, in a coma.

The Nancys is part detective story, part family saga, part small-town expose, with a hefty dose of extrovert gay culture and introvert or flat out odd local behaviour. There’s the weirdo’s next door, the local beauty pageant, an empty house and a pushy real-estate agent, the derelict hospital, the single traffic light (where the body was found), the problems in keeping in touch via Skype from an ocean going cruise, a young girl struggling with the reasons behind her beloved father’s death and her mother’s anger, the dive off a bridge taken by her friend that put him in the coma, her best friend and his family, the girl next door, the weirdness of the town, and nail polish in bright colours. It’s over the top, it’s reeking with banter and in-jokes, it’s slightly smutty, slightly absurd, often times a little repetitive, and it’s funny. It’s definitely not subtle funny, sometimes it’s hilarious funny, at other time’s it’s going to make you squirm. Individually the three main characters here, The Nancys, are interesting and together they are a sort of slightly off colour, slightly weird group of colleagues, with very unusual workplace conditions. Tippy, Pike and Helen however are a classic family grouping with tensions, and aggravations and love and support and a strong desire to kill each other at points. The affection that Tippy has for her Uncle Pike is immediately obvious, and it’s touching the way that she connects to, and worries about Devon’s role in her life into the future.

This isn’t classic crime fiction pacing though, so settle in for a lot of byways, highways, and laneways. You’ll be working through a fair bit of set up, and you’ll be reading a lot about pasts and futures, about life in a small town when you’re not one of the same, when it might appear that small towns have their own array of “not the same” as most other locations.

At the core of it though, this is character driven and Tippy’s very engaging, Uncle Pike’s funny and caring and Devon can bring his design stylings to our neck of the woods any day he likes. In the end the Nancys solve the crime, give the girl a chance to work through the highs and lows of life, and keep friends reasonably close. It’s a mystery, wrapped up in a family rubbing along, in a small town where everyone’s an individual, except they aren’t.