Lisa Spinelli (Maggie Gyllenhaal) is a dedicated kindergarten teacher. But she seems stuck in a sort of midlife crisis. Her homelife is rather dull, and to try and add some spark she has enrolled in an adult poetry writing class in New York, run by the handsome Simon (Gael Garcia Bernal). But he’s initially dismissive of her work, calling it derivative. 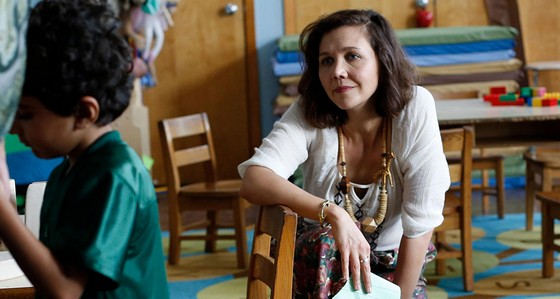 Then one day she hears one of her students, five- year old Jimmy Roy (Parker Sevak), recite some poetry and believes him to be some sort of prodigy. She writes down his words and initially passes them off as her own work in night class, impressing Simon with her profound thoughts. She wants to nurture Jimmy’s creative process, she becomes obsessed with his ability and before long her attentions take an unhealthy turn and she crosses a line from which there is no return.

The Kindergarten Teacher is a fairly faithful remake of Israeli filmmaker Nadav Lapid’s 2014 drama Haganenet; and it gives Gyllenhaal her best role since 2002’s Secretary. She delivers a nicely complex and subtly nuanced performance that is arguably one of the best of her career. This is her first feature film role in nearly five years, and she completely inhabits the character and delivers a fearless performance as Lisa, who becomes increasingly emotionally unstable and ultimately self-destructive.

There is also a nicely natural and unforced performance from Sevak who has a strong screen presence and imbues his character with a sense of innocence. There is a wonderful chemistry between Gyllenhaal and Sevak that enriches the drama. Bernal has a charming presence even if he is given little to do.

The Kindergarten Teacher is the sophomore feature for writer/director Sara Colangelo, who turned her award-winning thesis film Little Accidents into a feature. This quietly disturbing psychological drama takes us into some unsettling territory, and it raises the question of the fine line between where Lisa’s intention of mentoring the child’s innate talent leaves off and she manipulates him to fulfill her own thwarted artistic aspirations. Colangelo’s direction is restrained, understated and sensitive and she never judges Lisa.

The film has been nicely shot by cinematographer Pepe Avila del Pino (Ozark), whose camera lingers on scenes, giving them a more intimate feel. Produced by streaming giant Netflix, The Kindergarten Teacher is a slow-moving psychological drama that leads to a quietly devastating finale. However, it may not have broad appeal and will do well on the film festival and art house circuit.