The title is quite a mouthful, but The Guernsey Literary and Potato Peel Pie Society is a delightful British crowd-pleaser that combines the impact of war with true love. 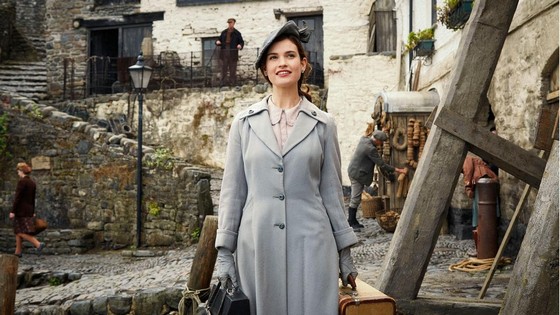 Based on the bestselling novel of the same name, the film tells the story of Juliet Ashton (Lily James), a free-spirited, successful writer living in post-WWII London.  Despite the success of her recent novel and support from her dear friend and publisher Sidney (Matthew Goode), Juliet struggles to find inspiration for her writing after the harsh experiences of the war. Poised to accept a marriage proposal from Mark Reynolds (Glen Powell), a dashing American GI, she receives an unexpected letter from a Guernsey farmer named Dawsey Adams (Michiel Huisman).

Juliet impulsively leaves for Guernsey. She hopes to write about the curiously named book club that Dawsey has written about. Juliet is charmed by the island and inspired by the members’ shared love of literature. As a lifelong bond forms between this unlikely group of friends, Juliet soon realises that the society is hiding a heartbreaking secret. As Juliet and Dawsey become close, she begins to unravel what happened during the difficult years under German occupation; and understand why the society’s members are so afraid to tell her their story.

US writer Mary Ann Shaffer and her niece Annie Barrows co-authored the novel. Published in 2008, it consists entirely of letters. Obviously, the screenwriters, led by Kevin Hood (A Royal Night Out) and director Mike Newell (Four Weddings and a Funeral) fleshed that out for cinematic purposes.

Lilly James charms in her portrayal of the pivotal character. Juliet is a woman with a strong conscience.

Time and patience are rewarded. We gradually get to hear the hidden story of the book club members and what they went through. In other words, it is a slow reveal … but by the end, we really care. A lot of the magic is in how the filmmakers have chosen to uncover the truth.

Furthermore, if this isn’t a love letter to the island of Guernsey, I don’t know what is. One shot after another of the unspoiled wilderness with ocean surrounds are intoxicating. The cinematographer is Zac Nicholson (The Death of Stalin).

The Guernsey Literary and Potato Peel Pie Society is a cross-generational movie that will appeal to adults of all ages.