The Nightingale (2018) rewrote the rules around brutal representations of Australia’s colonial past. Now The Furnace follows in its footsteps, albeit less successfully.

In remote Western Australia circa 1897, a young Afghani cameleer, Hanif (Ahmed Malek), is determined to escape the outback and return home. Hanif has witnessed a white man murder his mentor. Now he’s penniless and adrift. Then he stumbles on an injured bushman, Mal (David Wenham). Unwilling to let him die, he takes Mal to the only people he can trust – an indigenous tribe. But when elder Woorak (Baykali Ganambarr) learns Mal has stolen gold from the Crown, he immediately recognises that means trouble. So Hanif and Mal find themselves stranded and alone – suspicious of one another. 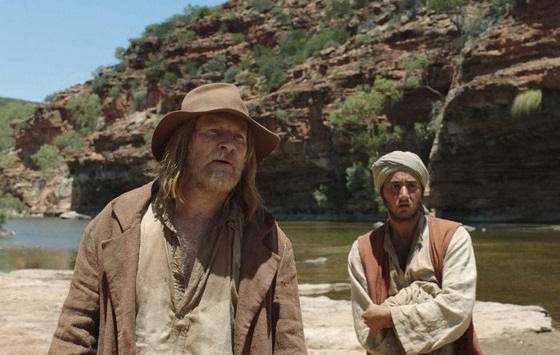 Mal is looking to find a furnace where he can melt down the gold bars so they no longer contain the conspicuous mark of the Crown. Hanif reluctantly plays along so he can share in the spoils and return home with his head held high. But every step along the way spells more trouble. On their tail are the law – and the men Mal ripped off.

Despite a shock near the start, it took me time to warm to The Furnace. I found it slow going and tough to watch. I didn’t find it free flowing. It felt laboured. I was confused about who fitted in where. The strong accents didn’t help matters, nor a number of particularly dark scenes.

I applaud the skittish representation of the chief protagonist Hanif by Ahmed Malek. He captured his character’s feeling of unease well and that translated to the audience. The mood throughout is one of caution and credit must go to writer and director Roderick Mackay for that. I was continually watching for the next calamity, and it almost invariably involves lives lost. It’s the Wild West, in more ways than one.

To me, The Furnace should have been far more accessible than it turned out to be. And that’s primarily because I felt like I was missing pieces of the puzzle. Perhaps more background and more mainstream treatment of the subject matter could have helped. As it is, it is more of a missed opportunity.