This is a big ask. Miss Fisher’s Murder Mysteries was (and is) one of Australia’s most loved TV shows. So even tinkering around the edges of it is going to be fraught; let alone embarking on a sequel of sorts. But Every Cloud Productions (who made both the original and the upcoming Miss Fisher feature film) obviously know what they’re doing. And that shows in their four-episode limited series, Ms Fisher’s Modern Murder Mysteries.

While Miss Fisher’s Murder Mysteries was set in the 1920s, Ms Fisher’s Modern Murder Mysteries opens in the 1960s. The Ms Fisher of the title (note the subtle change in appellation) is Peregrine Fisher (Geraldine Hakewill); Phrynne Fisher’s niece. The connection is explained early on, but it barely matters because this new mini-series launches straight into everything that fans loved about the original. Basically all you need to know is that there’s a new crime-fighting Fisher and she’s on the case. 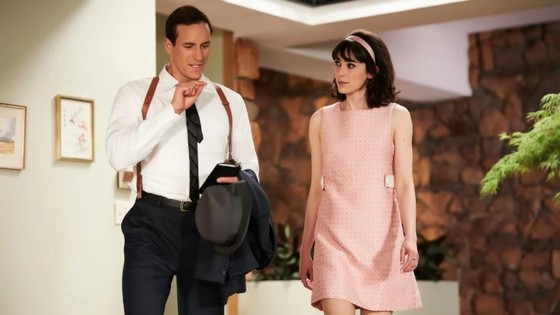 The first movie-length installment deals with the murder of a prominent fashion model in an up-market Melbourne department store (sorry, emporium, darling). Peregrine finds herself on the case pretty much by accident. She needs a little help of course; and the ladies of the Adventuress Club, led by Birdie Birnside (Catherine McClements) provide it. Naturally, Phrynne was a member of this secret society, but since she’s missing and presumed dead in New Guinea, it’s up to Peregrine to carry on the family sleuthing tradition. Seems the apple doesn’t fall far from the tree because before long Peregrine is a member of the Club – and on the trail of the killer.

Law enforcement is represented by two polar opposites – the corrupt Chief Inspector Sparrow (Greg Stone) and the charming but shy Det. James Steed (Joel Jackson). If you don’t recognise Steed as an analogue of Det. Jack Robinson from the original, then you’re really not paying attention.

Where Miss Fisher was all velvet curtains and gold lame; Ms Fisher is pastel colours, groovy 60s music and Capri pants. The house Peregrine inherits from Phrynne is a mid-Century modernist dream. It looks almost like a real-life version of the cartoon vision seen recently in The Incredibles 2.

If you’ve ever watched even a single episode of Miss Fisher, you’ll know they generally follow a tried-and-true pattern: a shocking crime is revealed; our heroine is roped in; she’s usually at least two steps ahead of the cops; red herrings are sniffed and discarded; a critical piece of evidence comes to light; the case is cracked; the killer is exposed and usually confesses; cocktails on the terrace. The writers of Ms Fisher’s Modern Murder Mysteries know the formula and adapt it to the 60s milieu. So the mini-series feels both fresh and familiar at the same time – quite a feat.

They also retain the original’s feminist slant; though it’s amplified somewhat here to take account of the somewhat more liberal views of the “Swinging 60s”.

Geraldine Hakewill doesn’t try to ape Essie Davis in the lead role. She cleverly brings a rather more playful sensibility to the character, while still allowing her critical intelligence to shine through. Joel Jackson’s Steed isn’t quite as stiff as Robinson, but brings a charming awkwardness to the role. Greg Stone is suitably odious as Sparrow while Catherine McClements lends credibility to Birdie, who effectively serves as Peregrine’s mentor.

While bringing a new angle on an old favourite can be dangerous, Ms Fisher’s Modern Murder Mysteries mostly avoids the pitfalls. If you liked the original, you’ll probably like this reboot. If you loved the original deeply and are worried its legacy might be sullied, I’d still say give this a go. It’s fresh, it’s fun and it can fill that Fisher-shaped hole in your life until the movie comes out later this year.

Ms Fisher’s Modern Murder Mysteries is streaming on 7plus, with new episodes each Thursday night over 4 weeks from 21 February 2019.