Hard to believe Brad Bird’s groundbreaking The Incredibles came out 14 years ago. He already had a solid reputation from his beloved The Iron Giant, but The Incredibles shot him to another level. Now Bird and an expanded team are back with Incredibles 2 – and they’ve done it again.

The Incredibles 2 picks up – literally – where The Incredibles left off all those years ago. You might remember The Underminer, who popped up at the end of the original. We find out how all that plays out; but then get into the heart of the story. You might also recall that superheroes were illegal. Nothing has changed, much as the Parr family would like it. But tech billionaire WInston Deavor (voiced by Bob Oudenkirk) wants to change all that. He whisks Elastigirl (Holly Hunter), Mr Incredible (Craig T Nelson) and Frozone (Samuel L Jackson) off to reveal his big plan. He wants to rehabilitate “supers” – and has a plan to do it. 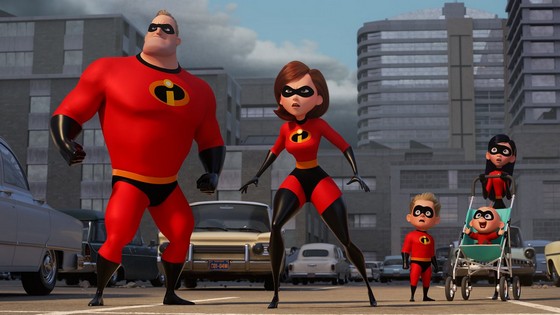 With the help of his genius sister Evelyn (Catherine Keener), he wants to show the world superheroes can be both helpful and safe. His plan however involves sending Elastigirl out into the world as the “face” of this new era; much to Mr Incredible’s annoyance. Now he’s left to deal with teenage Violet (Sarah Vowell), young Dash (Huck Milner) and baby Jack-Jack (Eli Fucile). But while Mr Incredible is dealing with incredibly demanding domestic duties, Elastigirl is facing a frightening new foe in the form of the shadowy Screenslaver.

The original Incredibles was a then-fresh take on the superhero movie. After all, you barely see the private lives of many superheroes; much less how they deal with things like household chores. And while the characters are familiar now, Incredibles 2 feels just as fresh. Its take on work-life balance in the 20-teens and the role of women in the workplace is neatly done. Its portrayal of the demands of home life is brutally honest. Its bad-guy (a mysterious figure who uses screens to hypnotise and control victims) is of-the-moment. And most importantly of all, it’s still a lot of fun.

Although nearly two hours long, it zips along with barely a breath taken. The large scale action sequences are as thrilling as those in any other movie you’ve seen this year. And special mention should be made of the state-of-the-art animation which creates some truly stunning images. Bird’s script sticks pretty closely to the tone of the original; which means kids will embrace it, but there’s plenty for adults to enjoy as well. At a time when other superhero movies are generally so deadly-serious, this offers an invigorating alternative.

Along with Frozone, the eccentric and energetic fashion designer Edna Mode (voiced by Bird himself) returns in this edition. As writer and director though, Bird channels the retro-futurism of the original to greater heights. The house where Winston puts up the Parr family is a marvel of mid-century modernism. It certainly wouldn’t be out of place in a James Bond film from the 1960s – which is, of course, the point. You can say the same about Winston’s super-yacht, which plays a pivotal role in the film’s climactic scenes.

As with all Pixar movies, a short film – here the very cute but affecting Bao – accompanies the main feature.

If you loved The Incredibles, I suspect you’ll love Incredibles 2. This rollicking animated adventure ticks all the boxes.