Most film franchises seem to run out of inspiration before too long, but the Mission Impossible series seems to have gone from strength to strength. The Brad Bird-helmed Ghost Protocol was arguably the strongest film to date. Rogue Nation took the series in a slightly different direction under the direction of Christopher McQuarrie (Oscar winning writer of The Usual Suspects). McQuarrie returns for Mission: Impossible Fallout, the sixth film in the series. And he gives us the best action film of the year by far. And although there are nods to elements of the popular television series created by Bruce Geller – the burning fuse, the iconic theme, the clever use of disguises, and the tape that self-destructs five seconds after delivering the briefing – the Mission Impossible series has moved further away from that concept and now seems entrenched in the territory occupied by the likes of Bond and Bourne. 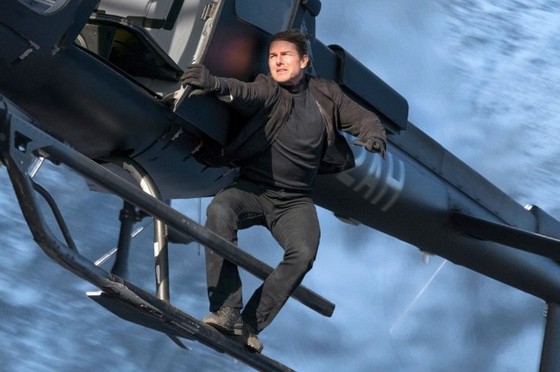 This time around Ethan Hunt (Tom Cruise) and his IMF team are charged with obtaining three plutonium orbs to prevent global catastrophe. These orbs, if sold on the black market, could be used to develop dirty nuclear bombs. The trail links back to Hunt’s nemesis from Rogue Nation Solomon Lane (Sean Harris), the head of a shadowy terrorist group known as the Apostles. But CIA director Erica Sloan (Angela Bassett) distrusts the IMF and sends CIA assassin August Walker (Henry Cavill) along on the mission. Walker’s instructions include watching Hunt and – if he goes rogue – then to take him out. Sloan and IMF boss Alan Hunley (Alec Baldwin) are at odds over the need for the team in this modern world.

The plot itself is a little too convoluted, but that hardly matters. It’s merely an excuse to build a series of impressive action set-pieces. McQuarrie has grown as a director and can now match it with the more accomplished action directors.

The action moves quickly through a host of exotic locales. The set-piece sequences include a punishing fight in the well-appointed bathroom of a nightclub; an extended car chase through the streets of Paris; a rooftop chase across London and even a helicopter chase through the treacherous mountain passes of Kashmir. The kinetic editing from Eddie Hamilton keeps things moving at a frantic pace. But it all comes down to the cliched nuclear countdown clock, which had some attendees at the preview screening laughing. However, at 147 minutes, it does seem a tad long.

McQuarrie delivers plenty of audacious stunts that would have killed a lesser man than Cruise. McQuarrie has collaborated with Cruise several times now (Jack Reacher, Rogue Nation; and he wrote Valkyrie for the star) and he knows how to push him to his limits. Kudos to the actor though for actually putting himself out there and attempting all the physical stuff himself. McQuarrie effectively blurs the line between CGI and live action by having his star do most of the stunts himself. And cinematographer Rob Hardy (Ex-Machina) shoots the film in such a way that we can see that it’s Cruise riding that motorbike or dangling from a helicopter.

Harris brings a sense of menace to his performance, but his Lane is not the most memorable of villains. Bassett registers strongly in her small role, while Cavill, not surprisingly, has a strong physical presence as Walker. Returning star Ving Rhames has been a regular in the series and again he brings a healthy cynicism to his role as Luther; while Simon Pegg brings a nervous energy and welcome comic relief to his performance as Benji, the former tech guru who has been promoted to field agent. Rebecca Ferguson also re-appears here as the enigmatic Ilsa Faust; as does Michelle Monaghan, who has been absent from the series since MI III. Her presence is an attempt to bring a measure of humanity to Hunt’s character.

Mission: Impossible Fallout certainly delivers plenty of thrills to nail audiences to their seats. It sets up huge expectations – should the franchise continue to a seventh film.