A largely predictable romantic drama, Love Sarah centres around three generations of women who go into business together in a culturally diverse area of London’s Notting Hill. 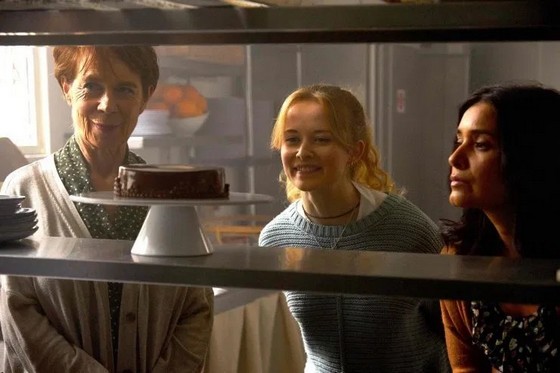 The Sarah of the title (Candice Brown) and Isabella (Shelley Conn) are best friends who were about to open a sweet-focused bakery together, but then tragedy struck. Sarah, an acclaimed chef, died in an accident, leaving Isabella devastated and with a mountain of debt. Not only that, Sarah also left behind a young adult daughter, 18-year-old Clarissa (Shannon Tarbet), an aspiring dancer. Sarah had fallen out with her stubborn mother, Mimi (Celia Imrie), who tried to reach out to her to coincide with plans to open the bakery. But now, of course, those plans are in disarray.

That is until circumstances conspire to bring Sarah’s best friend, her daughter and her mother together to try to right the ship and make a go of it (the bakery that is). While Isabella attended cooking school years ago, she subsequently went down another path professionally. So, the trio needs to find a skilled chef pronto and that’s when an old flame of Sarah’s, Matthew (Rupert Penry-Jones), shows up.

Love Sarah has warmth and charm, even if none of the women featured come off as touchy-feely types. There are bridges to mend and obstacles to overcome, but we – the audience – know instantly these will be successfully addressed. In fact, it is that journey that constitutes the movie. Each of the women has an independent streak, that is to say in many ways they can fend for themselves, but still they are significantly stronger as a triumvirate. And the question for Isabella is whether Matthew can be trusted.

The first screenplay for Jake Brunger, Love Sarah also marks the feature film directorial debut for Eliza Schroeder. They have taken a safety-first approach. Nothing offensive or all that surprising to see here. It is about family ties that bond.

While pleasant, the film hardly sets the world on fire, although its production values are admirable. It has a homely feel in keeping with the low-key storyline and it looks good. At times I felt the actors were a bit distant, failing to display the emotional resonance I would have liked. Mind you, that could have been at the behest of the director. I wanted to care even more about them than I did. I would have liked to be more invested in their journey. There were also fewer highs and lows in the script than there could have been … and some of the disappointments were quickly dealt with and overcome.