It’s party time as some of the greatest artists from the ‘50s to today take to the stage … again. Well, not really … but as reimagined in tribute form. And they are good – very darn good.

The history of Legends in Concert dates back close to four decades. It made its Las Vegas debut in 1983 as an initial six-week engagement in the heart of the strip. Legends is the longest-running production in that city’s history with its flagship show at the historic Flamingo Las Vegas Hotel and Casino. This is their fourth consecutive year in Australia.

All the songs are familiar and they are sung with gusto … getting the audience worked up – exactly what you want from a production like this. Eight performers – seven soloists and a group – take to the stage, along with eight dancers (four of each sex), who have more costume changes than most of us have hot dinners. They are accompanied by a five-piece band and up to three back-up singers (depending upon the act). Aiding the cause is a strong and colourful lighting show and two screens – one on either side of the stage – playing video of the actual artists in their heyday as the tributes strut their stuff.

All but one imitator closely mimics the voice of the real performer (half are no longer with us or are no longer performing – more’s the pity). Legends in Concert kicks off with Elton John (Stephen Sorrentino) performing five numbers, including Bennie and the Jets, Candle in the Wind and Crocodile Rock. Sorrentino is adept at both vocals and piano. With great timber in his voice, Daniel Thompson channels Johnny Cash for another quintet of songs, the likes of I Walk the Line, A Boy Named Sue and Ring of Fire.

Thereafter follows Dusty Springfield (Katy Setterfield) with four of her own – Son of a Preacher Man and I Only Wanna Be With You amongst them. The first act concludes with hits, including a medley, from the Village People, headlined by Hunter Gerard. Think Macho Man, In the Navy and YMCA.

After the break, Diana Ross (Marva Scott) takes to the stage with I’m Coming Out, a medley and Ain’t No Mountain High Enough. For a more contemporary sound, Lady Gaga (Erika Moul) is next. An energetic Moul also impresses on piano with Million Reasons and performs a triumphant duet of her Oscar-winning song Shallow from the movie A Star is Born. 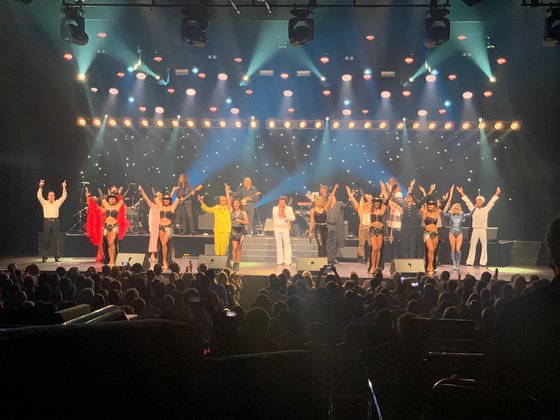 My only real disappointment of the night came with the appearance of Neil Diamond (Barrie Cunningham), one of my all-time favourite performers. Unlike the others, I didn’t think Cunningham captured his sound adequately, he lacked charisma and the orchestrations missed the mark. Then, they call him The King for a reason. What better way to finish a cavalcade of musical champions than with Elvis (Kevin Mills). Mills brought much humour, including a deliberately inflated sense of self – to his persona, belting out Burning Love, Suspicious Minds and Viva Las Vegas among others, audience interaction a constant byplay.

I have seen different Legends in Concert, but none as good as this. For the most part, the guys and gals have it all – they are polished and dynamic, getting the crowd clapping, singing, swaying and up on their feet. Legends in Concert, playing at The Palms at Crown until 26th January, 2020, is triumphant.

firstcommunications.com.au
Tags: Legends in Concert, The Palms at Crown