What a super professional, highly entertaining, up tempo show for the festive season from a boy band that has been doing just that – keeping crowds entertained – for more than 30 years! Not just here, of course, but in Las Vegas, where they have been headliners in residence for upwards of a decade.

Human Nature, performing at The Palms at Crown, combine Christmas classics – some with their own twist – with a number of songs penned just for the period of tinsel and glitter. More than that, brothers Andrew and Michael Tierney, together with high school friends Toby Allen and Phil Burton, present several juke box fancies (Will You Love Me Tomorrow?, Under the Boardwalk and Runaround Sue). They pair those with Motown favourites and, of course, their own hits (Don’t Say Goodbye, Every Time You Cry).

The quartet is accompanied by a highly accomplished six-piece band on guitar, bass, saxophone, trumpet, drums and keyboard. Behind them is a large video screen, onto which is projected a series of colourful images (including Santas on surfboards), as they warble and chat in their easy-going, charming style with their adoring fans. There is audience interaction aplenty … and these lads are never afraid to poke good natured fun at each other.

Taking advantage of the fact that an Aussie Christmas is decidedly warmer than that in the Northern Hemisphere, is Christmas in Australia. It is an ode to the fact that we like to shorten words and end them with a familiar “e” sound. So, we have barbie, tinnie, esky, mozzie and so on.

Act II starts with siblings performing a duet (I’ll Be Home For Christmas), before solos from Toby (Let It Snow) – in a show-stopping outfit – and Phil (Please Come Home for Christmas). Their mentor, Smokey Robinson, appears on video before the foursome get patrons up on their feet and dancing to the likes of Ain’t No Mountain High Enough, Uptight, Stop in the Name of Love and Dancing in the Street. 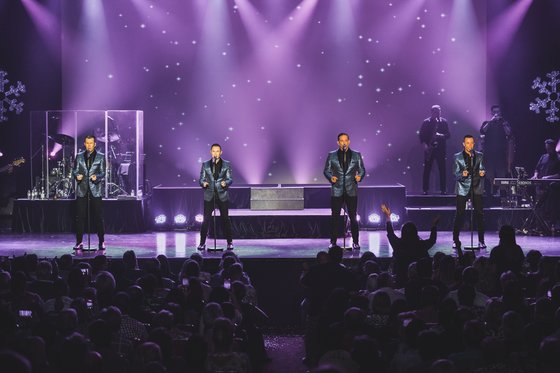 Dressed immaculately in various coloured and textured tuxedo jackets, coupled with black and, on occasion, white dinner shirts, black pants and, for the most part, bow ties, they harmonise magnificently (they always have). Even after performing together for so long, they have lost none of their spark or energy … and their choreography, which seems effortless, is impeccable.

It is clear that these lads are still proud to call Australia home, while our hearts, too, swell at the thought that they are, indeed, a native product that has made it big on the world stage. Human Nature’s two-hour Christmas show is on at The Palms at Crown until 15th December, 2019 … and it’s a beauty!