If you’ve ever seen Karel Reisz’s superb The French Lieutenant’s Woman (1981); or Michel Gondry’s Eternal Sunshine of the Spotless Mind (2004), you may find something familiar in Nicolas Bedos’ La Belle Époque. This brilliantly conceived drama of love and loss is inventive, poignant and compelling.

Bedos is an actor who’s turned to directing. That experience shines through this film, which explores both the acting craft and the process of creating illusion. He also wrote the script, which plays with the slippery nature of reality, particularly in these digital times. 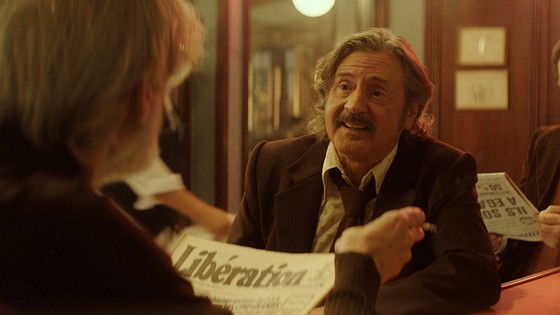 Victor Drumond (Daniel Auteuil) is a haggard former cartoonist. He hasn’t worked in years because he refuses to move with the times. He doesn’t want an iPad and stylus – he wants paper and ink. Marianne (Fanny Ardant), his long-suffering wife, is fed up with him. Indeed, she’s having an affair with François (Denis Podalydès), a patient in her psychology practice. After a late-night argument, Victor leaves – ending up in his friend François’s apartment.

Time alone sets Victor thinking. He remembers a gift from his son, Maxime (Michaël Cohen). It’s a voucher for an “experience” company run by Maxime’s friend Antoine (Guillaume Canet). The company offers clients the chance to “go back” in time to any day they choose. But it’s not time travel; rather Antoine and his crew carefully re-construct the chosen day using actors, props and sets. Victor chooses the evening in 1974 when he first met Marianne at a Lyon bar called La Belle Époque. Given the relationship, Antoine (who’s no saint) selects his sometime girlfriend Margot (Doria Tillier) to play Marianne. It proves an inspired – and dangerous – choice.

La Belle Époque dives deep into often-uncomfortable issues about relationships, ageing and obsession. It also provides some sharp social commentary, even if it never really breaks out of a comfortable middle-class setting. But it really stands out in its audacious and playful approach to our perceptions of truth and reality. Bedos cleverly dovetails this into the digital realm. I mean, we probably all know someone who pretends to be someone they’re not online. Even more interestingly, despite the film’s golden-hued nostalgia, Bedos doesn’t tut-tut about the Internet. The film recognises the great advantages it can provide, even if it occasionally laments the loss of traditional skills.

But the film’s most basic motivation is to delve into the art of visual story-making. Although the setting of a curated “experience” is niche, it easily translates to theatre and filmmaking. It pulls back the curtain on all the moving parts that go into bringing a story to life in a convincing way. It also posits the increasingly bold notion that actors are entitled to a private life, even if their craft puts them in the public eye.

Bedos employs a three-track structure to good effect. He builds the film around the two key relationships – Victor and Marianne; and Antoine and Margot – before skating between the two in the Victor – Margot (as Marianne) dynamic. DOP Nicolas Bolduc (Enemy) captures the action in stunning detail; while the score by Bedos and Anne-Sophie Versnaeyen (Rust and Bone) provides a memorable mix of orchestral music and hits from the 1970s. If the film harbours a challenge, it lies in Bedos’ rapid-fire dialogue, which occasionally requires intense concentration on the subtitles.

French cinema Daniel Auteuil (Hidden) anchors the impressive cast as Victor. Although the role is bread-and-butter for someone of Auteuil’s experience, he manages to elevate it into something greater. Fellow stalwart Fanny Ardant (8 Femmes) is equally engaging as the plain-talking Marianne. Guillaume Canet captures the “difficult” Antoine just about perfectly. But Doria Tillier is the real “find” of the film (although she’s been in French movies since 2017). She’s brilliant as the complicated Margot, and ends up owning the picture.

With quality film offerings a little thin on the ground at the moment, La Belle Époque is a ray of sunshine. This thoughtful and thought-provoking film offers a treat for cinema lovers.