One of the truisms of gambling says the house always wins. However, with The House – a supposed comedy about an ordinary family that set up an illegal underground casino in the leafy streets of suburbia – it’s the audience who are the losers. Let’s face it – when was the last time Will Ferrell made a decent movie? Recent films like Get Hard, Daddy’s Home and even Zoolander 2 have been bland disappointing and largely unfunny. He seems to have lost that unpredictable edgy quality. Now mainly does the same familiar shtick in every movie he makes. He seems to be stuck in a rut, playing the everyman who makes some bad decisions. The characters he plays are virtually interchangeable in every movie. And they’re not terribly funny! 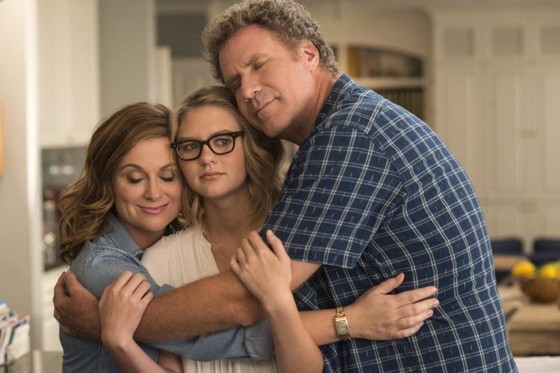 Here he teams up with Amy Poehler, a gifted comedian in her own right with her work on SNL and her collaborations with Tina Fey. The pair play Scott and Kate Johansen, a middle-class couple. They’re happy when their daughter Alex (Ryan Simpkins) is accepted into the college of her choice. But when the scholarship they were counting on to help pay the tuition fees is suddenly cancelled, they find themselves in a financial bind. Desperate to find the necessary money, they accept an offer from their gambling addict neighbour and friend Frank (Jason Mantzoukas, from Dirty Grandpa) to go to Vegas and win their fortune.

But when things don’t go according to plan, Frank comes up with an even more bizarre idea. They transform his basement into an illegal casino. The get-rich-quick scheme is successful and soon the money is rolling in. But with sudden wealth, they also begin to change their personalities drastically. Soon they arouse the suspicions of corrupt local councillor (Nick Kroll) and the hapless policeman Officer Chandler (Rob Huebel, recently seen in the big screen version of Baywatch). Chandler makes Don Knott’s Barney Fyfe seem like a Mensa graduate by comparison. They also attract the attention of a gangster (Jeremy Renner), who tries to muscle in on their action.

The House is a comedic riff on Martin Scorsese’s Casino, but is only moderately successful. The director is Andrew Jay Cohen, a writer making his feature film debut here. Cohen co-wrote the script with Brendan O’Brien, his regular collaborator on films like Bad Neighbours. But this is only fitfully funny, and tonally uneven. There was an opportunity for the filmmakers to satirise the American ethos of greed and materialism here, but sadly they miss the opportunity.

There’s some physical comedy with a brutal fight night, and the trio being forced to deal with the odd cheat. These scenes however have a rather nasty undertone. Cohen keeps up a frenetic pace throughout, but unfortunately there’s a paucity of genuinely funny moments. Many of the gags are telegraphed.

The third act of the film itself becomes too far-fetched, and pushes the material in a different direction to the original intention.

Ferrell and Poehler desperately try to wring laughs out of the patchy script. Renner seems distinctly uncomfortable with his small role. Mantzoukas is arguably the best thing here as the desperate loser Frank, whose wife has left him because of his addictions to both gambling and online pornography. Cedric Yarbrough, Kyle Kinane, Lennon Parham and Michaela Watkins play some of the Johansens’ eccentric neighbours who frequent the illegal casino. Outtakes during the end credits seem to show the cast had a lot of fun shooting the film, but very little of this fun has reached the screen. And, as is increasingly common nowadays, most of the best gags have been shown in the trailer, so there are few surprises.

There have been few genuinely funny screen comedies this year, and The House is another disappointment. The fact that the distributor didn’t show it to media in advance of its release was warning enough about its lack of quality. This is like a crapshoot – you roll the dice and take your chance.