After the failure of movies like Snatched and CHiPs, good humour, hijinx, pecs and genetalia abound in this welcome return to form for lighthearted comedy. Baywatch follows devoted lifeguard Mitch Buchannon (Dwayne “The Rock” Johnson – The Fate of the Furious) as he butts heads with a brash new recruit (Zac Efron – Bad Neighbors). Seth Gordon (Horrible Bosses) directs from a screenplay written by Damian Shannon & Mark Swift.

For a generation of TV fans, the name Baywatch conjured up images of sun, surf and statuesque lifeguards like David Hasselhoff and Pamela Anderson running in slow-motion in form-fitting red swimsuits. We all knew it as pure escapism. 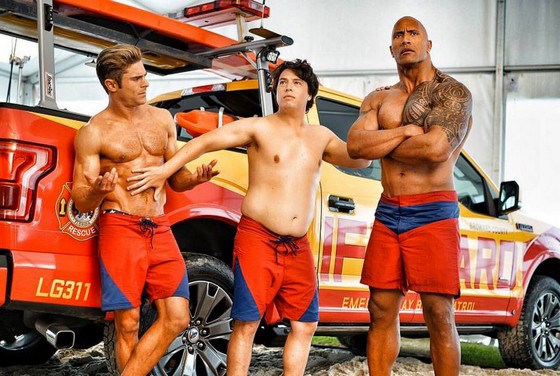 In Emerald Bay, no one looms larger than legendary lifeguard Lieutenant Mitch Buchannon. As the leader of the Baywatch team, Mitch has become something of a local folk hero. “He cares deeply about the people of Emerald Bay and they love him for it, to the point that the locals have created their own mythology around him,” Johnson says.

From the beginning, Baywatch had been envisioned as a buddy comedy. The producers knew they needed an actor who could hold his own against Johnson’s larger than life on-screen alter ego, not to mention his off-screen persona. They found their foil in Zac Efron. He plays Matt Brody, a bad boy Olympic swimmer, who arrives in Emerald Bay expecting a spot on Mitch’s highly competitive, handpicked Baywatch team. But Brody is an arrogant punk who doesn’t understand Baywatch, the value of teamwork nor the family dynamic Mitch has created.

The final member of the team is Ronnie (Jon Bass – Loving), an Emerald Bay local with a sizeable crush on C.J. and even bigger dreams of joining Baywatch. He is not a Greek statue, rather an awkward guy of the wrong shape while everyone else is super hot and extraordinarily cool.

The new Baywatch team is put to the test when a dangerous new drug begins washing up on the shores of Emerald Bay. The timing coincides with the opening of The Huntley Club, a high-end beach resort owned by the villainess Victoria Leeds. She is played by Miss World 2000 winner, Priyanka Chopra (TV’s Quantico), who makes her American film debut.

The screenwriters have paid due reverence to the TV series while giving the material a cheeky 21st century makeover. They have found the right balance of laughs and cheesy moments with a well chosen cast that has strong camaraderie. In short, they have a whole heap of fun with a plot that is all but incidental.

The Rock is his genial self – true to form by never taking himself too seriously. Watch and smile for his diminutive figurines in a fish tank. His bromance with Zac Efron works a treat. So, too, the heat between Efron and the gorgeous, but no-nonsense character Alexandria Daddario plays. Then there is the cute interplay between the most unlikely of lifeguards, the IT nerd and the woman of his dreams, whose very presence turns him to jelly.

So, sit back and enjoy the laughs. Rated MA, Baywatch the movie scores a 7½ out of 10.