In an age of political correctness, this is one film that well and truly breaks the mould … and then some. Hotel Coolgardie is a warts-and-all look at Australia’s ugly drinking culture and its impact.

Walk into any bar across outback Australia and there’s a good chance your beer will be poured by a young female backpacker on a working holiday visa. And so it is at the only pub in the remote mining town of Coolgardie, where the arrival of a new pair of foreign barmaids every few months is a welcome change of scenery. 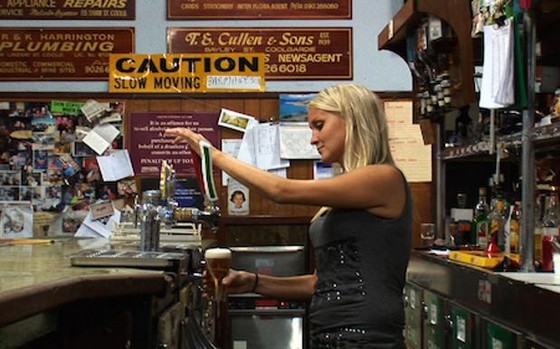 As the hotel’s tough-as-nails proprietor, Coffey, will tell you, he’s supplied the town with literally hundreds of barmaids over the past 18 years. For some of his motley mix of customers – conditioned by the coarseness and isolation of life out there – the “changeover” of the barmaids is a chance to chat with a new face from another walk of life. It’s a splash of femininity to break the monotony of their otherwise hyper-masculine lives. For others, “fresh meat” behind the bar is an opportunity “to tag it – to put their names to it first”.

Fresh off the plane (having recently been robbed of their travel savings in Bali) and attracted by the idea of an authentic outback experience, Finnish traveling companions Lina and Steph are the latest foreigners en route to a dot on the map more than 500 kilometres inland from Perth. At first taken by the warmth of the inhabitants, it isn’t long before they find themselves victims of its strange culture of insularity, alienation and impunity.

Harangued by a scathing new boss and subject to relentless mockery and come-ons from booze-addled patrons, they struggle to find a foothold in a world that is as claustrophobic as it is isolated. In limbo, somewhere between being desired and disdained, Lina and Steph’s only hope is to try to connect with the people around them. Forced to navigate relationships fraught with drunkenness, misguided sexual advances and the simmering inner conflicts of would-be companions, the girls’ working holiday becomes a test of endurance.

With its unblinking, fly-on-the-wall approach, Hotel Coolgardie is an unsettling journey deep into an outback Australia you certainly won’t see on glossy travel shows.

West Australian director, cinematographer, sound technician and editor Pete Gleeson first encountered the hotel around 15 years ago. He was there first as a visitor passing through Coolgardie, then again on a stint in the goldfields as a labourer. Eating and drinking at the bar at night, Gleeson got to know the inimitable, larger-than-life proprietor, Coffey and encountered many of the unique characters that populated the pub.

The way I saw it, these Finnish girls were mere pawns set up for failure from the get-go. It all starts when the bar owner promotes the arrival of the new staff – who are about to embark on a three-month stint to earn some money – on a chalkboard sign outside his pub. The blokes who frequent the place do everything but drool at even the prospect of these newbies.

The European ladies land in this backwater totally unprepared and meet a bunch of largely socially inept, inebriated patrons – largely men, but some women too – a number of whom try to put the hard word on them.

I am somewhat amazed the filmmakers received permission to shoot half this vision. While what Hotel Coolgardie showed was not pretty, it was certainly illuminating. It presents Australians in a particularly bad light … as a bunch of losers, no hopers and drunks. I loved the film’s raw truthfulness, while despairing at the uncouth nature of what is revealed. So, in a few words – for better or worse, bogans rule! Rated MA, Hotel Coolgardie scores a 7½ out of 10.