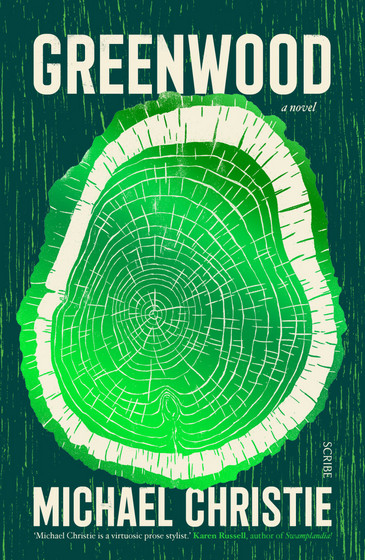 In 2038, Jacinda “Jake” Greenwood is an impoverished tour guide showing those wealthy enough to afford it the wonders of Greenwood Island. The majority of the world’s trees have been wiped out by disease and dust borne illnesses are impacting on those who cannot afford to deal with them. But when she finds out that she may actually be related not only to the Greenwoods, after whom the island is named, but also to the Holt corporation which owns the island, her world is thrown for a loop. It is a long time before readers come back to find out how this impacts on Jake as Christie then jumps back to 2008 and Jake’s estranged father Liam who becomes a carpenter, to 1974 and her grandmother and environmental activist Willow, then 1934 to the story of the Greenwoods and the Holts and then 1908 and the story of Harris and Everett Greenwood, brothers by chance.

It is tempting to compare the structure of the novel, going back and then forward through time, to David Mitchell’s Cloud Atlas. But Christie has a deeper analogy for his structure. One that involves following the growth rings of a tree from its outermost layer to its innermost and then back out again. In fact trees are used throughout the book as analogies for characters and actions. They, and their protection and exploitation, are the abiding metaphor for the book.

This is the heart of this book, a sprawling, multigenerational family saga peopled by fascinating, flawed characters all dealing with where they have come from, how people perceive them, and where they think they want to go. The centrepiece, and the longest of the five stories, is the section set in 1934. This story set during the long drought and depression – a dusty and “dying world” as it appears to one character. It involves a found/stolen baby, two estranged brothers, multiple doomed love stories and a critical journal. This, like all of the other tales in Greenwood is written with page-turning verve and deep feeling.

While Christie uses a future environmental disaster as a framing device, it is also an exploration of our relationship with trees. Each of the stories takes a different approach. From the Greenwood brothers use of firewood to make a living in the early 20th century. To the growth of Harris Greenwood’s lumber business in the 1930s while his brother ekes a living tapping maple trees. To his daughter’s repudiation of the business and minor eco-terrorist activities in the 1970s, her son Liam’s turn to carpentry using reclaimed timber and finally Jake as a tour guide and scientist. And through this, Christie is trying to capture to complexity of our relationship with nature, as both exploiter and conserver and the potential problems when the balance between the two shifts too far. And with an understanding that things have been bad before but with a different attitude they may be righted again.

Greenwood is a compulsively readable, beautifully observed, deeply felt and rich tale that roves across Canadian history and landscape. Full of mystery, satisfying revelations and character moments, it is the first great book of 2020 and should not be forgotten when the best of lists are being compiled at the end of the year.

Greenwood is published by Scribe.