The low budget indie crime drama Good Time is the latest film from the Safdie brothers (Benny and Joshua). Their films, like Daddy Longlegs, often explore the struggles of losers who live on the edges of society. This is a gritty and downbeat black comedy and heist drama with plenty of energy.

Connie Nikas (played here by Robert Pattinson) is a small-time crook who robs a bank with his mentally handicapped brother Nick (Benny Safdie, who also directs). But Nick gets caught and sent to Rikers. While Connie desperately tries to raise the $10k bail money, Nick is badly assaulted. He ends up in hospital under police guard. Connie sneaks into the hospital to rescue him, but in a case of mistaken identity he takes another heavily bandaged prisoner instead. 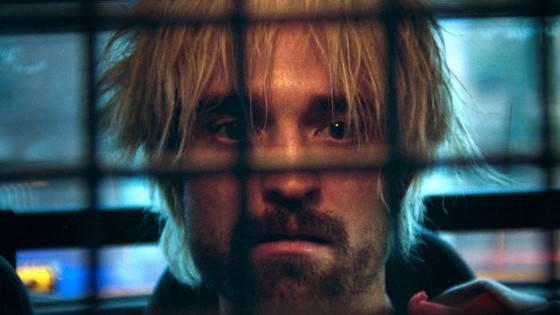 Connie spends the rest of the night on the run as he tries to reconnect with his brother. He has to travel with Ray (Buddy Duress) and Crystal (Tallah Webster) a 16-year old girl whose grandmother tries to help Connie. A series of bad decisions lead him from one awkward situation to another.

The title itself is quite ironic as this is a rather downbeat mix of drama and black comedy. The film follows Connie on his nocturnal journey through a pitiless New York cityscape. A pervasively downbeat mood permeates the material. Some of this may remind audiences of Martin Scorsese’ After Hours. Josh Safdie with regular editor and collaborator Ronald Bronstein wrote the script, and it unfurls with plenty of energy. The Safdies play around with the genre tropes, pushing the material in unexpected directions.

Benny Safdie brings a grim realism to the material. It’s reminiscent of the gritty Hollywood crime dramas of the early 70s and the new wave of films from then-young filmmakers like Scorsese and Coppola. The film was shot guerrilla-style over a number of locations. Sean Price Williams’ neon-lit cinematography and his use of hand-held cameras gives the film an energetic feel. The frenetic action is accompanied by a throbbing score from Oneohtrix Point Never.

Connie is a loose cannon who lurches from one bad situation to another as his desperation grows. Pattinson gives a strong performance, despite being cast against type. He’s almost unrecognisable here with his beard, his tough swagger and his bleached blonde hair. Like his Twilight co-star Kristen Stewart, Pattinson seems to be making some interesting choices, and this is one of his best performances.

The strong cast also includes a cameo from Jennifer Jason Leigh as Connie’s girlfriend Corey, and Captain Phillips star Barkhad Abdi as a hapless security guard at a theme park. Safdie himself brings a naivete and vulnerability to his performance as the damaged and psychologically scarred Nick.