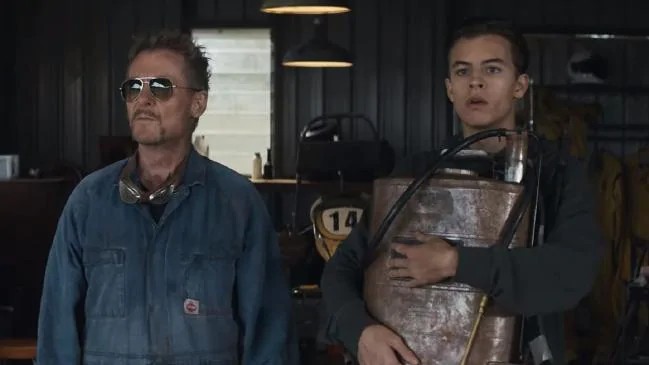 Fifteen-year-old Jack Hooper (William Lodder) and his widowed mother Christie (Frances O’Connor) move to a small town in Western Australia a few years after the death of his father/her husband.  She opens a fruit and vegetable shop and he doesn’t take long to get involved in the competitive world of go-kart racing.

In that arena, Dean Zeta (Cooper van Grootel), the son of the man who runs a professional team, rules the roost. Dean is an arrogant bully.

Jack has natural talent, even though he has never before stepped into a go-kart. He has fond memories of being a passenger in his dad’s car when his father did burn outs. But talent can only get you so far if you are reckless, which Jack has a tendency to be. He enlists the help of a former slick go-kart racer, Patrick (Richard Roxburgh), who runs the local go-kart circuit, but has his own demons. Patrick rides Jack hard. Also in Jack’s corner is his new best friend, Colin (Darius Amarfio Jefferson), who is picked on by Dean’s crew and Mandy (Anastasia Bampos), Dean’s sister, whose knowledge is immense, but is all but dismissed by her father and brother.

Both teams’ aim – as is also the ambition of every other team – is to win the National Go Kart Championship.

GO! is written by Steve World (Paper Planes) and directed by the man who was at the helm of the UK version of Top Gear from 2008 to 2012, Owen Trevor.

Unfortunately, I feel the whole thing was done by the numbers. What I mean by that is you have the typical stereotypes in play.

There’s a widow and her son who are trying for a fresh start. He is hurting but believes he should keep his real feelings in check.

There is a tormentor – and his mates – who are bound to get their comeuppance. We mustn’t forget the grizzled older mentor in pain who has to make the movie’s hero earn what is inevitably coming to him. And the girl who is undervalued and unappreciated for the skills and smarts she brings to the table.

But wait, there is more.  So, the thing the movie is lacking more than anything else is originality. Many of the lines and scenes are corny – some are cringeworthy and downright annoying. A number of the performances are more wooden than others.

The cinematography by Peter Eastgate, including a number of strong panoramic, aerial shots, is a feature. To me GO! has the feel of an old-style telemovie.

As it is, it is a little film with heart, but only small audience appeal – once seen, easily forgotten. Rated PG.