The future world looks fairly simplistic. Mankind has been transformed into a superficial society in which the truly kindhearted population has nestled in one or another oasis, while the riotous part indulges in looting and hanging out in a striptease/dance temple or drug centers. 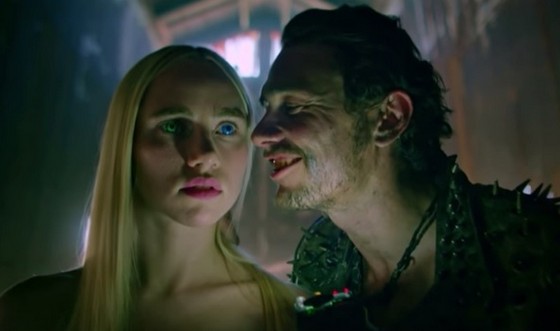 Also choosing names will be simpler in that period, as it seems. When you are the leader of a motorcycle gang who wander around on their dirt bikes to terrorize innocent people (such as pirates and barbarian tribes did in ancient times), you simply call yourself War Lord (James Franco). When you run a place where drugs are being used somewhere on the American coast, you call that place “Paradise Beach” and yourself simply Drug Lord (Mila Jovovich). The idolized woman of the peaceful tribe who lives in tents between the palm trees is then conveniently called Queen (Lucy Liu). And you’ll never guess it. Her son is called Prince (Jeffrey Wahlberg). The scriptwriters of this somewhat unsuccessful Mad Max clone have given this a lot of thought. Had there been a person who owned a stall where he sold mineral water, they certainly would have called him Water Lord.

Future World just exudes an atmosphere like Mad Max. It has identically scenery. A world affected by drought and full of sand, where lawlessness rules and everyone apparently pillaged the local leather goods store at the start of the Apocalypse. Most traveling is done using transport that can handle sandy surroundings. And furthermore, you can be sure your head is being smashed by some brutal-looking colossus of a guy just because you’re near him. Apparently, the only thing that still makes sense in this long-lost world is the opening of alcohol, drugs and dance facilities (where functional nudity is obviously necessary). To be honest, Future World looks like a trial version of Mad Max: Fury Road. The similarities are sometimes so obvious. I think Franco, who’s not only playing a leading role but also directed this, will be bothered by the copyright commission.

You got to hand it to Franco, he’s quite busy in film land. The number of films he played in as an actor and the amount he directed, is impressive. One wonders whether Franco has quantity as the main goal instead of quality. Well, you can’t call Future World a quality product. The story is meaningless. The combat actions and pursuits look dull and uninspiring. Even the aspect of the high-tech android Ash (Suki Waterhouse), that suddenly proves to be in possession of a consciousness, is something that we have already experienced in a better way in Ex Machina. Ash doesn’t look very expensive here and its malfunctioning is only made clear by a sizzling, crackling sound and a short-term non-functioning. Furthermore, it’s as if Suki Waterhouse just came from The Bad Batch set. Apparently, deserts are a fetish for her.

It’s also quite disappointing when talking about acting. And then to think that they have managed to get a few big names for this production. James Franco is widely known (not difficult if you see his resume of films) and he did a better job in for example, Rise of the Planet of the Apes. I thought Mila Jovovich was the most interesting character. But she’s not as intriguing here as in the Resident Evil franchise. Lucy Liu has a rather limited role. Luckily her part was of more importance in Kill Bill and Charlie’s Angels. James Wahlberg (he says uncle to Mark) is actually one of the leads but is so uninteresting it’s as if he blurs with the background. Even Snoop Dogg shows up as the owner of the seedy striptease-joint Love Town (and yes, his name is Love Lord – the creativity kills me). A small contribution but highly entertaining.

The most positive thing I could think of about this film is related to the dedication and enthusiasm of James Franco. If you continue to produce films as if they rolled off an assembly line, someday there will certainly be an exquisite result. But to be honest, this boring and meaningless creation is just a failed attempt. A sloppy and superficially made film that seems so ridiculous that it’s not even funny. No, this film can be avoided like you’d avoid a cheap holiday offer to stay for 2 weeks in the Sahara without water. It’ll kill you.

Future World is now available to rent or by on Playstation, Google Play or YouTube.